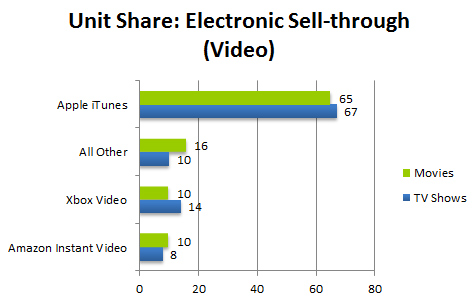 According to global information company The NPD Group, Apple’s iTunes dominates the internet video market, much like it does the digital music sector. The company’s latest report reveals that iTunes’ share of electronic sell-through (EST) for television shows reached 67% last year, while EST television sales from its strongest competitor Xbox Video comprised merely 14% of the market.

It must be noted that EST includes only video content that is purchased by consumers for permanent ownership and not the rentals. In terms of feature-length movies, iTunes boasted a 65% share of EST, with Amazon and Xbox Video far behind at 10% each. Similarly, iTunes has a clear lead in the Internet video-on-demand (iVOD) sector with a 45% market share of online movie rentals, which is more than twice the share of Amazon Instant Video (18%).

“Apple has successfully leveraged its first-mover advantage and of iTunes, iOS and the popularity of iPhone and iPad to dominate the digital sale and rental markets for movies and music,” said Russ Crupnick, senior vice president of industry analysis at NPD. “While worthy competitors have come along, no other retailer has so thoroughly dominated its core entertainment product categories for so long.”

According to NPD’s VideoWatch customer satisfaction tracking, 8 out of 10 iTunes video customers said their shopping experience was excellent or very good (77 percent), 75 percent were pleased with the level of current releases, and 73 percent praised the selection. 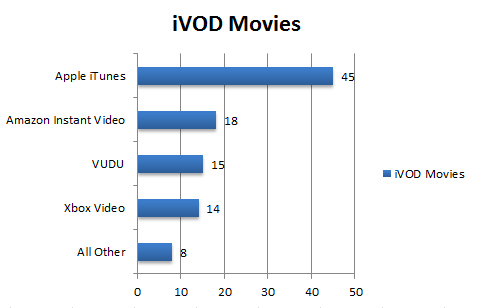 The study also found out that another key to iTunes’ success is “consumer cross-shopping across categories”. According to the report, 58% of those who rented a movie from iTunes also bought a music download in the prior three months.

Twitter on Friday confirmed a December 2021 security breach that stole data from more than 5.4 million user accounts using a zero-day exploit — reports BleepingComputer. The hack exploited a vulnerability in the mechanism that Twitter lets users link email addresses and phone numbers to their accounts. Threat actors were able to submit an email...
Nehal Malik
17 hours ago

Apple announced this week its Maps team will be driving and walking across six Canadian cities next week. The Apple Maps team will be in Toronto, Montreal, Calgary, Vancouver, Edmonton and Ottawa from Monday, August 8, 2022. Apple says they will be “driving vehicles and wearing specialized backpacks with equipment to help us build the...
Gary Ng
18 hours ago