The App Store has a built-in auto scan feature which allows you to redeem an iTunes gift card by simply using the camera on your iPhone, iPad, or Mac to scan the gift code, and save the hassle of typing the numbers in manually. Turns out this App Store feature is tuned to recognize a unique, hidden font, as well as the dimensions of the box around it, MacRumors is reporting. 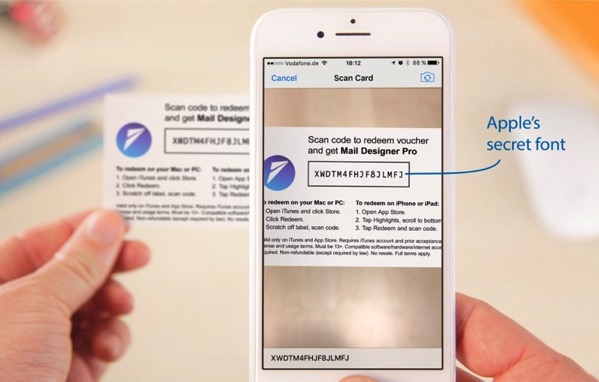 Discovered by the developers behind the popular app Mail Designer Pro, the font that Apple is using is hidden deep within iTunes, which the developers came across while digging into how Apple’s promo code engine works in an effort to make their own scannable cards. They also tried the box alone with a range of fonts like Courier and Monaco, and attempted to identify the unique characteristics of the font to find it, but that didn’t work.

When you look at some of the other folders inside iTunes, we found a tantalizing plugin called “CodeRedeemer.” It showed promise. But alas, no font files there either. The app binary does give a hint of where the heavy lifting is being done: “CoreRecognition.framework.”

Hidden in the CoreRecognition.framework, there are two fonts: “Scancardium,” for entering and recognizing codes, and “Spendcardium,” which appears to be for obscuring credit card details as they’re entered. The two fonts can be found by going to Finder on a Mac, clicking Go, choosing Go to Folder and pasting the following: /System/Library/PrivateFrameworks/CoreRecognition.framework/Resources/Fonts/

Since these fonts can be installed on a Mac and can be used within different apps, developers can use them to create custom App Store promo code cards that can be scanned in the same way as iTunes gift cards.