iTunes Match Debuts in Canada for $27.99 Per Year, Then Disappears 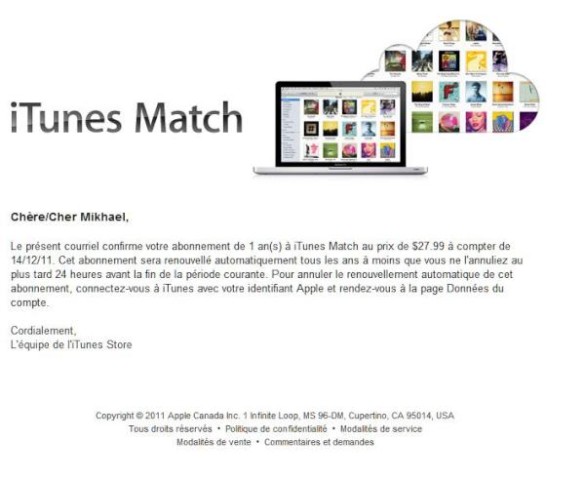 It appears Apple has held true to its promise of releasing iTunes Match in Canada before the end of the year, as the service debuted registrations for a short window, then disappeared.

Based on emails received, some of you have been able to subscribe to iTunes Match in Canada, only to have the service ‘disappear’–similar to what we saw with the TV Shows menu in the Apple TV.

At a cost of $27.99CDN per year, those that were able to enable the service (within Account Settings) and subscribe saw updated ‘cloud status’ icons appear next to their MP3 library.

Today’s rollout of iTunes Match appears to be part of a larger International launch in Europe, Australia, and New Zealand.

Were you able to subscribe to iTunes Match in Canada before Apple pulled the plug?

According to a report by MacRumors, Apple has updated its battery replacement policy for the sixth-generation ‌iPad mini‌, allowing customers to get their batteries replaced without requiring a device replacement. Prior to the announcement, if a customer wanted to get their iPad mini 6 battery replaced, Apple Stores, authorized service providers, and repair centers will give those...
Usman Qureshi
28 mins ago

A new Apple support video has detailed how you can use the iPhone's Safety Check feature to disconnect your device from people, apps, and devices you no longer want to be connected to. You can use Safety Check to check whom you’re sharing information with, restrict Messages and FaceTime to your iPhone, reset system privacy...
Usman Qureshi
40 mins ago