At the beginning of November 2009, Apple launched “iTunes Preview”. With the new iTunes Preview, clicking on an iTunes link on a website opens up a new web based iTunes pane within the browser, as opposed to the actual application itself.

When iTunes Preview was first released, users could only view information such as title, artist, ratings, and more, however still needed the full iTunes application in order to play, preview, or purchase a song.

Well iTunes Preview seems to have received an update as yesterday GigaOM noted that Apple has brought 30-second song previews to iTunes Preview. The GigaOM report explains that the new song previews are encoded in 44.1 KHz AAC format at 300+ kbps, via QuickTime.

I’m glad to see Apple do this, as it is far more convenient to preview the song in a browser than having to boot up the entire iTunes application. 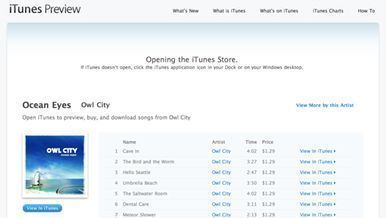