When the iPad launched in Canada, one of the most popular apps were Pages, Numbers, and Keynote. Otherwise known as the iWork productivity suite for iPad.

After the announcement of the iPhone 4 this morning at Apple’s annual WWDC event, a new feature page describing the enhancements coming to the iPhone 4/iOS 4.0 Mail application was posted on Apple’s website. Within the page, Apple has included a small section highlighting email attachments and how the carious attachments can be opened with an iPhone.

Currently, any attachments iPhone owners receive such as PDF, Word, Excel, PowerPoint, Page, Numbers, Keynote, and etc, open fine through the Mail app, but never into another application.

However, a photo on the iPhone 4 feature page showcases an image showing a presentation attachment with a dialog box asking if the user would like to open the attachment in Quick Look or “Keynote”.

At this time, Keynote, or the iWork suite of applications, are not available for the iPhone. Since nothing was mentioned during the keynote presentation this morning at WWDC and to see this image on Apple’s iPhone 4 feature page begs the question of if and when iWork will be coming to iPhone 4 or iOS 4.0? 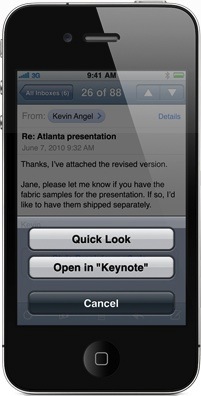