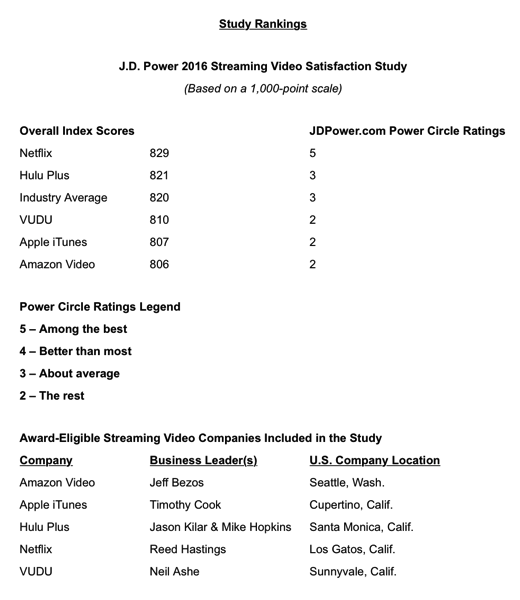 “Part of the reason is demographics. Customers who only stream are younger than those who also have TV. Nearly two-fifths (37%) of customers who only stream are 18-34 years old, compared with 30% of those who also have TV. Notably, 52% of cord nevers are 18-34. Also, streaming-only customers are less likely to use transaction-based streaming services, which perform higher in the content measure.”

The study measured customer satisfaction by examining six key measures i.e. performance and reliability; content; cost of service; ease of use; communication; and customer service. Scores for each measure were reflected in an index based on a 1,000-point scale.

The results show that Three-fifths (60%) of streaming customers are cord stackers; 23% are cord shavers (those who still subscribe to TV but have downgraded their service package); 13% are cord cutters (those who have recently canceled TV service). Remaining 4% of customers were found to be cord nevers i.e. who have never subscribed to pay TV and only subscribe to streaming video service.

Netflix led with the highest score in five of the six measures, performing particularly well in performance and reliability and in customer service, closely followed by Hulu Plus at a score of 821, while Apple’s iTunes came in at fourth with a score of 807 and Power Rating of just ‘2’.

DC Rainmaker (Ray Maker) continues to put Apple’s latest products such as the Apple Watch Ultra to the test. One of his recent videos compared the iPhone 14 Pro Action Mode against the GoPro Hero 11 Black action camera which costs $649 CAD. Action Mode on iPhone 14 Pro is limited to 2.8k resolution, versus […]
Gary Ng
6 mins ago

WhatsApp has announced a new feature that allows users to create and send a call or chat link to anyone on WhatsApp, even if they’re not in your contacts. The company shared the news in a tweet posted earlier today, suggesting that you can simply add the link to an invite or send in a...
Usman Qureshi
21 mins ago

As noted by the folks over at MacRumors, the latest iOS 16.1 update brings live sports scores and other real-time activities to iPhone 14 Pro’s Dynamic Island. For those who haven’t upgraded to iOS 16.1 yet, it introduces a new Live Activities feature that allows iPhone users to keep tabs on are happening in real-time,...
Usman Qureshi
33 mins ago