The iPhone Dev Team are the first out of the gate, to release a jailbreak tool for iPhone OS 4.0. MuscleNerd announced, on Twitter, that they have released redsn0w 0.9.5, for Mac. Redsn0w 0.9.5 supports iPhone 3G, on iPhone OS 4.0. This is for developers only, though, as you still need to have your iPhone 3G’s UDID Â properly registered with a Apple Developer account. This is basically a pre-release, so that devs can get their jailbroken apps ready for the official OS 4.0 release.

The Dev Team warns that the normal user should stay away from this, as there is not a lot of jailbreak apps that work with OS 4.0. Also, your baseband will be upgraded to 05.13, cannot be unlocked, and cannot be downgraded. YE BE WARNED!! 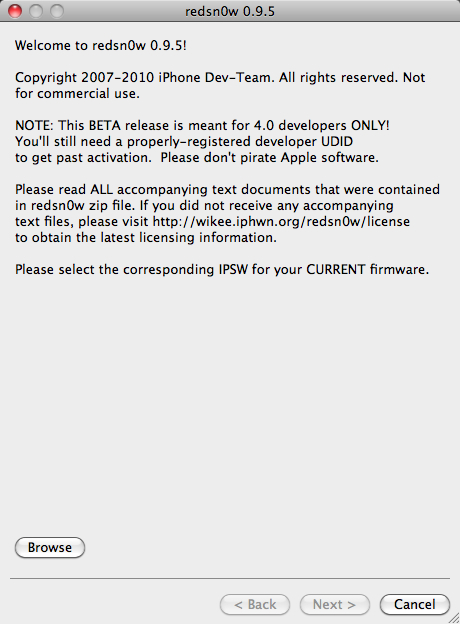 Here’s some details, from the iPhone Dev Team:

This is a beta release of redsn0wÂ targeted at developers of jailbroken apps. It uses the same pwnage2 DFU-mode exploit that we’ve been using since the 2.x days. Nothing new is revealed to Apple, and it’s not applicable to the iPad. Don’t go near it if you use yellowsn0w, ultrasn0w, or blacksn0w.

Please not that this beta isÂ not meant for the average end-user. There are many things â€œbrokenâ€ with jailbroken apps in the 4.0beta1 environment right now (that’s the real reason we showed â€œVeencyâ€ in the 4.0 jailbreakÂ demo video last week, instead of say MobileTerminal.app, which is broken!). This beta redsn0w allows the developers behind those jailbroken apps (like MobileTerminal.app!) to fix their software before the general public gets iphoneOS 4.0.

Because it’s meant for JB app developers, this beta redsn0w does not perform hactivation.Â You’ll need a properly-registered developer UDID with Apple to get past the activation screen. For similar reasons, there is no Windows version of this beta redsn0w (since apps are developed on MacOSX).Â Please don’t pirate Apple software.

Anyone other than developers of jailbroken apps porting their software to 4.0beta1 should still be usingÂ our previously-released redsn0ws for 3.0 through 3.1.3

For full details of this release, go here.

UPDATE: Apparently, some developers have had issues with SMS and data reception, after using redsn0w 0.9.5 beta 1. Well, the iPhone Dev Team have responded, and released redsn0w 0.9.5 beta2. If you’re a developer, download it here. You’ll have to do a fresh restore to OS 4.0, before using this update.

Spotify is launching a new Home experience that includes feeds for both Music and Podcasts & Shows, making it easier for listeners to scroll through the type of content they’re looking for. The updated Spotify home screen will make the experience more personalized while allowing users to dig even deeper into their recommendations. In the...
Usman Qureshi
13 hours ago

Snapchat is launching a new in-app parental tool called 'Family Center,' to help parents get more insight into who their teens are friends with on the social media platform. With Family Center, parents can find out who their kids have been communicating with, without revealing any of the substance of those conversations. "Our new Family...
Usman Qureshi
13 hours ago