Last Wednesday, former Apple CEO Steve Jobs submitted his sudden resignation which came to us all as a huge shocker. Some of us expressed our feelings by posting emotional comments on our Facebook walls while others left “how sad it makes me” tweets on their timelines. But this one guy named Joseph Tame, a digital media producer in Japan, decided to go for a 13-mile run in the shape of a giant Apple logo right through central Tokyo, carrying two iPhones and the Runkeeper app in order to pay his tribute to the legendary Steve Jobs. 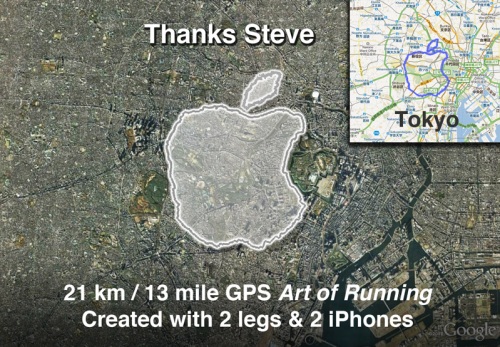 Joseph wrote on this blog:

“It’s for this that I’d like to personally show my appreciation to Steve for his vision and leadership, which has made a direct positive impact upon my life. His work has also served to revolutionize the mobile phone industry, something that was desperately needed here more than anywhere. I’d like to wish Steve all the best, and hope that his health improves fast now he’s able to focus more on getting well again.”

He started off his journey around the western side of Tokyo’s Imperial palace to create the east side of Apple logo. He then ran though the Tokyo neighborhoods of Roppongi and Omotesando to create the bottom curve of Apple logo eventually completing the western end of the logo around Shinjuku. On average, he ran at the speed of  9-minute per mile burning approximately 1,724 calories to show his appreciation for the company he truly loves!