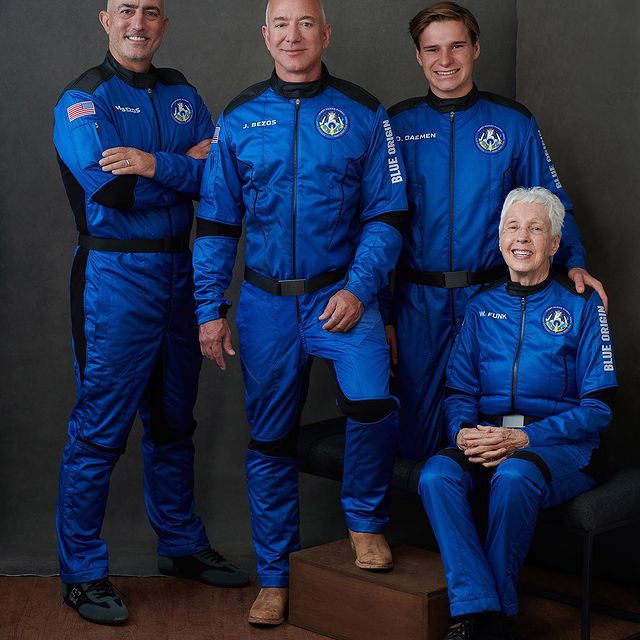 Amazon founder Jeff Bezos made history as the second billionaire in over a week to fly to space and back, with his company Blue Origin.

Alongside Bezos was his brother Mark, 18-year old Oliver Daemen and 82-year old Wally Funk, with the latter two representing the youngest and oldest to visit space. An anonymous winner of the flight trip that paid $28 million USD did not make the trip due to “scheduling conflicts”, and the latter’s spot was replaced with Daemen earlier last week.

The flight of Blue Origin’s New Shepard rocket took off early on Tuesday morning from Launch Site One in West Texas. The capsule containing the four astronauts was fully automated, compared to the piloted space flight from Richard Branson earlier this month, who beat Bezos to space.

Blue Origin reached 106 kilometres altitude, which was 16 kilometres higher than Branson’s flight. The company earlier this month pointed out this was a ‘true’ flight to space, taking jabs at Branson’s Virgin Galactic.

From the beginning, New Shepard was designed to fly above the Kármán line so none of our astronauts have an asterisk next to their name. For 96% of the world’s population, space begins 100 km up at the internationally recognized Kármán line. pic.twitter.com/QRoufBIrUJ

You can see clips of Bezos floating in space, offering Skittles candy and more. At the post-launch conference, Bezos thanks Amazon customers and staff for paying for his flight to space.

Blue Origin video from inside the New Shepard capsule in space:

“I also want to thank every Amazon employee and every Amazon customer because you guys paid for all of this.” https://t.co/hMS01eRzMs pic.twitter.com/3CueAOX9M8

Video of the launch:

New Shepard landing on its own:

Capsule landing in the desert:

Check out the full replay below of the launch and landing below:

A replay of the post-launch press conference:

The flight lasted just over 10 minutes and after landing back to earth, Bezos said it was the “best day ever!”.

Apple has just rolled out a redesign for its official website, introducing an all-new navigation bar with fancy drop-down menus on both desktop and mobile. As spotted by Parker Ortolani, the updated drop-down bar makes it easier to navigate the website and relatively faster to get to individual product pages. All-new https://t.co/pXaoM71lcY nav bar with...
Usman Qureshi
25 mins ago

According to leaker @Jioriku, Apple will soon launch the Beats Fit Pro wireless earphones in Volt Yellow, Coral Pink, and Tidal Blue colours. Although Apple is yet to make an official announcement, MacRumors claims to have spotted listings for the new colours on some Apple reseller websites in Europe. Similar to the AirPods Pro, the...
Usman Qureshi
42 mins ago

Google's parent company, Alphabet, on Monday started notifying employees in Canada of job cuts, according to a spokesperson for Google (via The Globe and Mail). The news comes a little over two weeks after Alphabet CEO Sundar Pichai announced the company would be laying off 12,000 employees (or 6% of its total workforce) across its...
Nehal Malik
56 mins ago