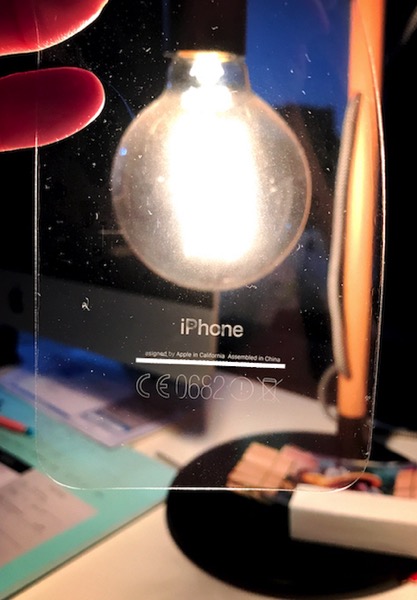 Jet Black iPhone 7 and 7 Plus owners should think twice before applying or removing any protective skin wraps, since a number of users are reporting that the regulatory text printed on the back of the iPhones, such as “Designed by Apple in California”, comes off the device when removing the protective skins, such as those from Slickwraps or Best Skins Ever, MacRumors is reporting.

MacRumors forum member ksyu found out the hard way when he removed a full-device skin from his iPhone 7 Plus and noticed the letters transferred onto the plastic. Under bright light, all of the rear markings, including “iPhone” and the required regulatory labels, are easily distinguishable. “I had a normal protector on for about 1 minute and took it off,” he said. “The writing peels right off.”

Another user, who has also shared a video (embedded below), experienced the same issue when removing Slickwraps skin from his Jet Black iPhone 7 Plus. He says that the writing actually came off onto the clear Slickwraps “just like pulling silly putty off of a newspaper comic strip”. It is however not yet known whether the writing came off because the wrap is sticky or because it was a wet install.

Although the fine print does not completely come off the iPhone, it does become faded significantly. Check out the following video for a better idea: