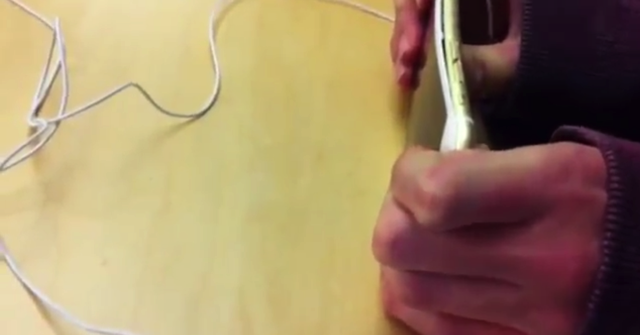 Two teens, Kylie and Danny, who decided to put the iPhone 6 ‘bendgate’ controversy to the test, have broken at least four iPhone 6’s in the course of a 4-minute folly, causing over $2,500 worth of criminal damage at an Apple Store (via The Daily Dot). What’s even more stupid is that the two kids uploaded a video of themselves carrying out these acts in an Apple store to YouTube, while showing their faces and referring to one another by name.

“The pair presumably eventually realized their actions might have consequences, and have deleted the original video. But the Internet never forgets. An automatic Reddit mirroring service means a video record of their monumental stupidity has been captured and shared publicly, for all the world to laugh at”.

Funniest of all, Kylie defends his actions against the fact they might be doing something illegal by saying, “We were in the Apple store bending and breaking their iPhone, which is like criminal damage I guess. I don’t even care to be honest, because it’s Apple’s fault”.

Looks like the two missed the Wall Street analyst Walter Piecyk’s recent remarks on Twitter who also tried to bend some display model iPhone 6’s in an Apple store:

Just stopped in an AT&T store to try and bend a 6+. You have to be kidding me. That is not bendable. $AAPL

It’s embarrassing I didn’t check for myself earlier but #bendgate is ridiculous. $AAPL

Check out the video at his link and tell us what you think. We’d love to hear your thoughts on this one!