Online classifieds site Kijiji recently celebrated their 10th anniversary after launching in February 2005. The site now reaches over 100 cities with 6.1 million ads at any given time.

The site has shared some iPhone and iPad sales data exclusively with iPhoneinCanada.ca. The one item with the most replies to ads? That’s Apple’s iPhone, as annual upgrades mean old models end up for sale. Below is a snippet from the company’s 10th anniversary infographic: 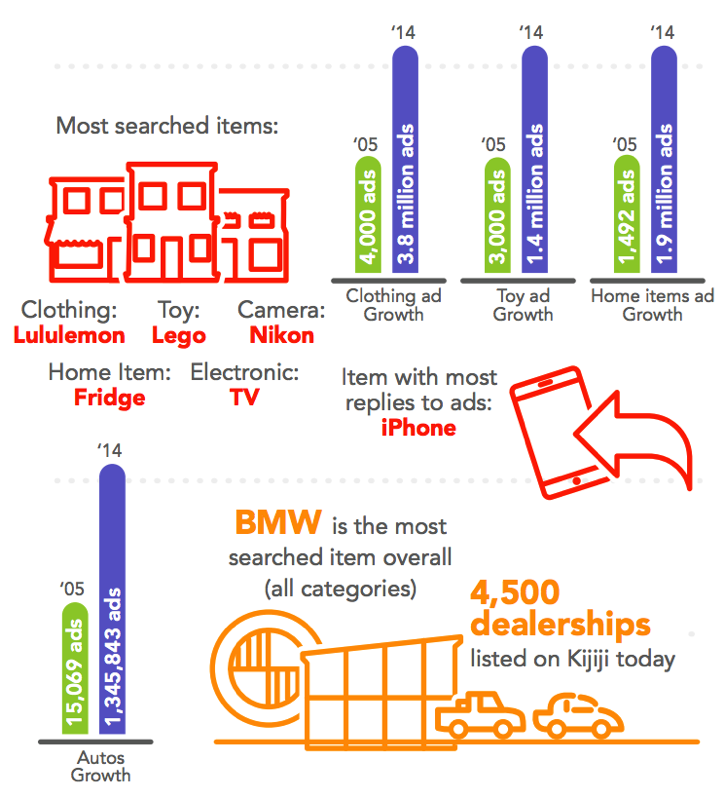 According to Kijiji, the most popular iPhone sold on the site to date in terms of inventory has been the iPhone 5S with 27%, followed by the iPhone 5 at 19% and iPhone 4S with 17%, while the iPhone 6 and iPhone 6 Plus make up 20% together.

Below are the average prices listed for iPhone models:

As for iPad data, the iPad mini makes up the majority of current inventory with 26%, followed by the original iPad and iPad 2, both at just under 15%. Numbers show iPad Air and iPad mini counts are increasing, while older models are decreasing. There are currently close to two times as many iPad minis listed compared to iPad Airs.

The iPad mini and iPad 2 generates the most replies at 2.2 and 2 per ad, followed by the iPad mini 2 and iPad Air at about 1.6 replies per.

As for average prices listed for iPads?

When it comes to Apple versus Samsung, the iPhone maker beats the South Korean phone maker. Currently there are 46,800 iPhone ads versus 24,500 Samsung smartphone ads on the site; on average there are 1.5 to 2.5 iPhone ads for every Samsung ad.

When it comes time to sell your iPhone or iPad, do you use Kijiji?

The operating system (OS) for Apple's long-rumoured mixed reality headset is now reported to be dubbed "xrOS." This naming convention comes following reports that Apple was naming its AR/VR headset OS "RealityOS." In a report from Bloomberg, Apple's new naming convention appears to have come out of nowhere. However, the report goes on to state...
Steve Vegvari
54 mins ago