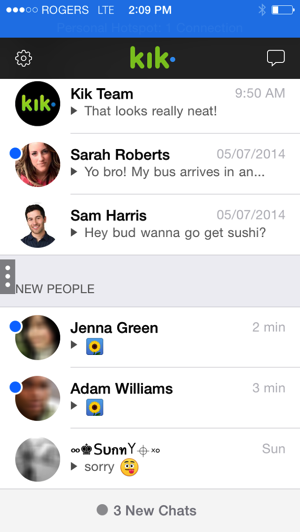 According to a report by Re/Code, Waterloo-based messaging app Kik has raised $38.3 million in new funding and has also acquired Relay, a messaging network focused on sending and receiving GIFs. Back in May, the company had announced that is continuing to grow “rapidly” with 120 million users, as every day over 275,000 people joined the messaging platform.

“The round was led by Valiant Capital Partners, and included new investors Millennium Technology, Value Partners and SV Angel. Existing investors Foundation Capital, RRE Ventures, Spark Capital and Union Square Ventures were also in on the round, bringing Kik’s total funding to just north of $70 million since its 2009 launch, according to co-founder and CTO Chris Best. The startup bought Relay in a combination of cash and stock, according to Relay co-founder Jon McGee, although neither company offered financial details.”

Even though Kik is substantially smaller than the likes of WhatsApp, Facebook Messenger or WeChat, the report notes that its strength appears to be the i”ntensity of its user base: Millions of teenagers”. Nearly 40% of the 13- to 25-year-olds in the U.S. are using the service. The company now plans to use the money to focus on hiring, hoping to double its workforce in the next year. We’re not WhatsApp, we’re not looking to never make money and get bought,” co-founder and CTO Chris Best said. “We want to find a play here.”

As part of the Relay acquisition, Kik will soon roll out a native tool for sharing GIFs on the the service.

Amazon announced today it will stream 25 James Bond films on Prime Video beginning on October 5, 2022. According to the company, these 25 Bond films set to stream in Canada, the U.S., UK and other key territories is part of the 60th anniversary celebration of the iconic film franchise. Also coming is The Sound […]
Gary Ng
17 mins ago