Kindle for iOS Updated with Audible Audiobook Integration [u]

Amazon has announced today an update to its Kindle iOS app to play Audible audiobooks and allow seamless switching back and forth between titles.

“We’re working hard to help customers find more moments each day to enjoy a great book,” said Russ Grandinetti, Senior Vice President, Amazon Kindle. “Integrating professional narration into our Kindle apps means you never have to put down a favorite book—start reading at home, get in the car and simply tap a button to continue listening without losing your place.”

Using the company’s Whispersync for Voice, users will be able to switch from the Kindle ebook title to the Audible audiobook version, which is kind of neat for those who also love listening to audiobooks.

What’s New in Version 4.3
Listen to Audible audiobooks! Customers owning both the Kindle and Audible versions of a title can now listen to the audiobook right in the Kindle app.

Now you can use the Kindle app to switch back and forth between reading a Kindle book comfortably at home and listening to the story while driving to work. 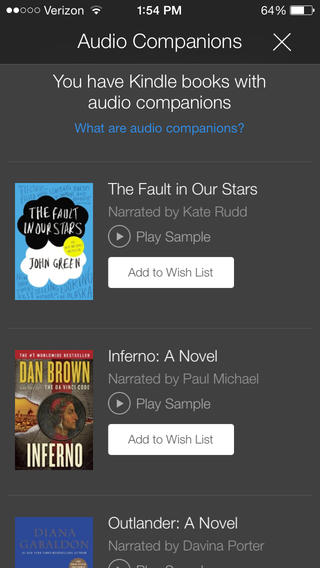 Update: Looks like this update for the USA only. Apologies. Blame Canada.