Amazon Sale: All Kindles Go on Sale for Mother’s Day

If you’re stumped on finding that perfect gift for Mother’s Day (which is in six days), Amazon Canada wants to help as they’ve discounted their Kindle e-readers. 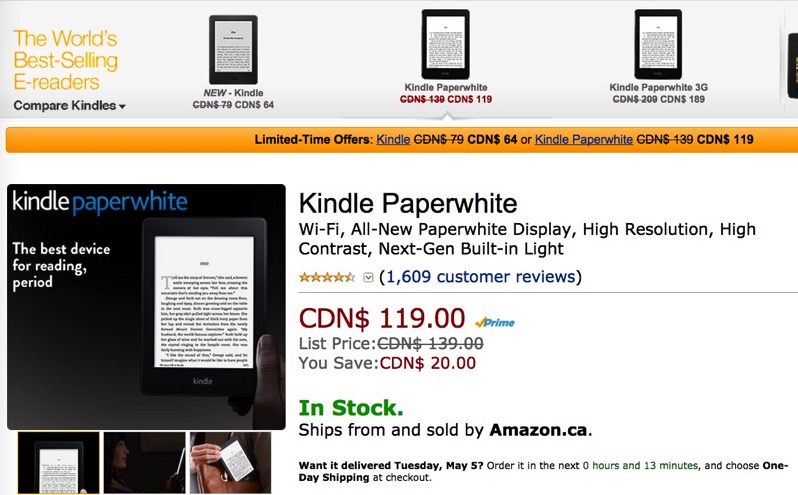 Amazon normally holds a couple sales every year on their Kindles so this is definitely the time to jump on them if you want to save a few bucks. There’s free shipping and all models are Prime eligible. Amazon also offers gift wrapping for $3.99 plus the option of a personalized note for mom.

With WhisperSync, you can read your Kindle books from the iOS app and continue where you left off from the Kindle (and vice versa). With the Kindle Paperwhite model, its front-lit screen is definitely an easy way to rest your eyes after a long day of staring at LCDs (we love ours).

The Amazon leather cover, while pricey at $39.99, is worth it as it automatically turns your screen on and off, while also adding some extra grip.

Amazon really wants you to choose the Kindle over Apple’s tablets, as the Paperwhite is noted to be “over 30% lighter than iPad mini,” while you also won’t get screen glare in bright sunlight.

Click here to check out the Kindle Mother’s Day sale from Amazon.ca before it ends.