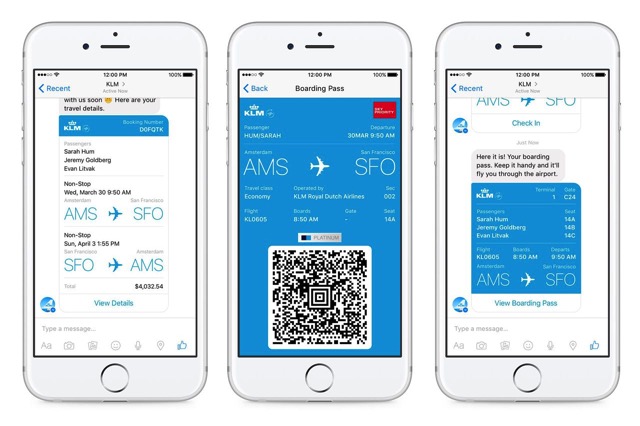 KLM Royal Dutch Airlines has become the first airline and the first major European partner for Facebook Messenger, by introducing passenger check ins, ability to get flight updates, make travel changes and talk to customer service reps straight from Facebook’s Messenger chat app (via USA Today). Since the launch of “Messenger for Business” almost a year ago, hotel chain Hyatt and retailers Walmart and Everyone have also tried out the service to chat with customers.

“You have so many different channels to communicate with services and businesses and all of those things are imperfect, but they all bring something. What we have been able to do is bring the best of each of these methods inside one conversation that happens in Messenger,”says David Marcus, vice president for messaging products at Facebook.

The lure of adding airlines? An estimated 80% of passengers on any given plane in the U.S. have the Messenger app, Marcus says.

Facebook has also been inspired by messaging services like WeChat and Line that help users schedule doctor’s appointments, book restaurant reservations, shop for shoes, play games or the lottery and send money to friends, all from within the app. According to technology and strategy consulting firm Activate, over 2.5 billion people have registered to use at least one messaging app. Activate expects that number to reach 3.6 billion by 2018.

KLM is rolling out the Messenger service gradually so it might be a while before it becomes available to you.