Koogeek HomeKit Smart Plug Goes 25% Off at $31.99 on Amazon with Coupon Code

Looking for a HomeKit compatible smart plug? Check out the Koogeek Wi-Fi smart plug, which normally retails for $42.99, but coupon code GMD8SHHC applied at checkout saves you $11, taking the price down to $31.99, or 25% off the retail price, one of the lowest prices we’ve seen on Amazon.ca. 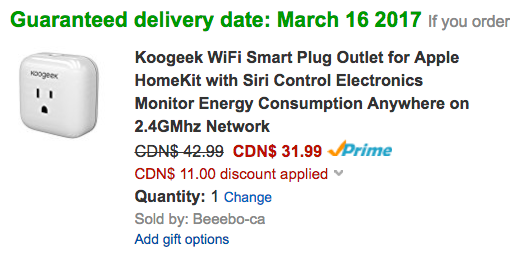 This HomeKit smart plug will allow you to control any outlet with Siri and Apple’s Home iOS app, plus also setup automated scenes, timers and monitor your energy consumption. The device has a 30 day money back guarantee, along with an 18 months replacement warranty.

The unit only works on the 2.4GHz band, so if you’re relying only on a 5GHz band at home, this unit may not be for you.

We bought one of these Koogeek wall plugs last year (read our review here) and so far, we really like it. We’re able to turn on and off a lamp in our living room with ease, either via Siri (on my iPhone or Apple Watch), or one tap via Control Center. We can also set timers and remotely control the lamp thanks to our Apple TV 4 acting as our HomeKit hub.

Click here to jump on the Koogeek while the coupon code still applies on Amazon.

Music streaming giant Spotify's shares surged as much as 10% today after the company reported Q4 earnings that beat analysts’ revenue estimates with strong user growth. According to CNBC News, Spotify reported 489 million monthly active users for the quarter, up 20% year over year. There were 33 million net additions to monthly active users...
Usman Qureshi
15 mins ago

1Password developers have just shared a preview of all the new features and improvements coming in their next major update, especially for iOS users. Reorder fields and sections inside items One of the biggest improvements in the forthcoming 1Password 8 update will be the ability to reorder fields and sections within items. "Just edit the item,...
Usman Qureshi
29 mins ago

Apple analyst Ming-Chi Kuo has today claimed in a series of tweets that only the highest-end 'iPhone 16 series’ model will feature a periscope camera lens next year. Earlier this month, a report by The Elec noted that the new periscope camera lens expected to debut this year exclusively in the iPhone 15 Pro Max will...
Usman Qureshi
53 mins ago