Touchy is a new Cydia tweak that allows users to use Apple’s Touch ID technology, which first debuted along with the iPhone 5S in September 2013, to open up specific apps depending on which finger is scanned. Jeff Benjamin from iDownload Blog has been testing the tweak before its public release and he likes it. 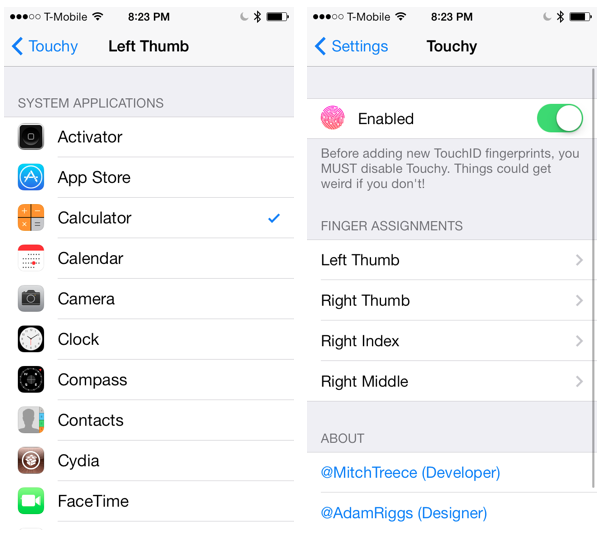 The app lets you assign up to five different apps with five different fingers via the settings panel. Note that you must set up Touch ID (Apple’s way) before proceeding to set up this tweak or else things could get weird.

Understandably, most of the tweaks we’ve seen involving Touch ID revolve around some sort of security aspect, but Touchy is among the first Touch ID oriented tweaks that dares to do something different. Take a look at our video inside to see how the tweak works in action.

Once you install the tweak from Cydia’s BigBoss repo, you will spot a new preferences tab in the stock Settings app. From the preferences tab you will be able to set up and change which app will open with which finger.

Each time you add or remove a Touch ID finger you will be required to respring. The process of launching an app, after you are set up, is as simple as you think, a simple tap and hold on the sensor will quickly open the app you have associated with that finger.

Touchy, developed by Mitch Treece, will be available from Cydia’s BigBoss repo soon at an introductory price of $1.99. Afterwards, the tweak will be permanently priced at $2.99. Of course, to use the tweak you must have an iPhone 5S. Let us know what your thoughts are about this tweak.