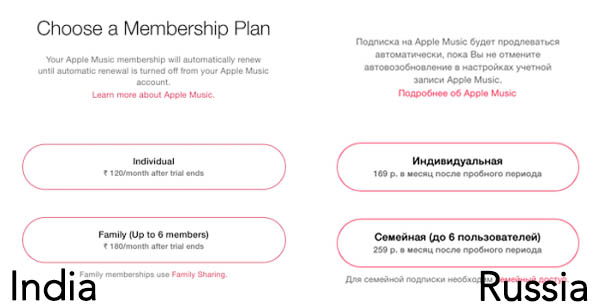 According to an Apple Music sign-up menu popping up for a number of developers and public beta testers on iOS 8.4 beta 4, Apple’s upcoming music streaming service may be priced as low as $2 – $3 per month in countries like India and Russia, MacRumors is reporting. In contrast, the service will cost $9.99 per month in the United States, and most likely in Canada as well, once the first 3-months free trial expires for Apple Music subscribers.

“A pair of separate reports by Technology Personalized and Russian-language tech blog TJournal share screenshots that suggest an Apple Music individual subscription could cost Rs 120 per month (~$2 USD) in India and 169 rubles per month (~$3 USD) in Russia. While the lower prices in these countries are not confirmed beyond these screenshots, they would be in line with similar pricing offered by rivals such as Rdio, Guvera and Gaana”.

The following screenshot obtained by The Next Web from Apple’s Music app on a developer beta of iOS 8.4 shows the sign-up menu more clearly, showing a price of Rs.120 ($2) per month at launch in India. It must be noted that Rs. 120 is also the cost of most albums on iTunes in India, as well as the monthly subscription fee for Rdio’s service in the country. Similar, the 6 member Apple Music Family Plan in India shows a price of just Rs.180 ($3) per month. 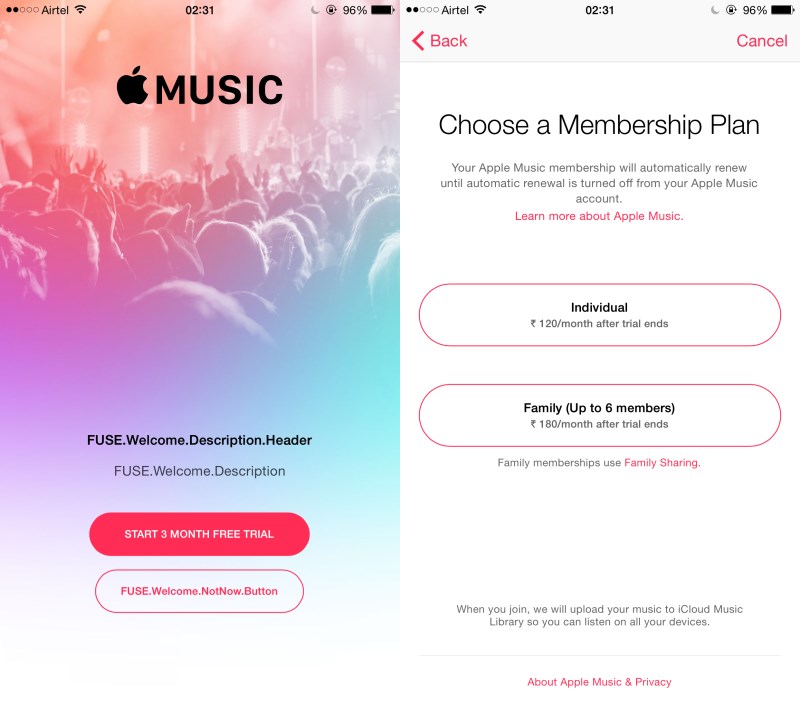 It’ll be interesting to see how Apple Music fares in markets outside the US, where the music streaming market is way more competitive.