“Leaked” Photo of the 3G iPhone?

Boy oh boy, you gotta love the “hoopla” created prior to any upcoming Apple event. With the case of the iPhone, the “hoopla” just gets out of control! If you haven’t seen some of these pictures already on the net, take a closer look below.

The picture below is apparently a shot of the upcoming 3G iPhone. It was reported on iphon.fr (en Francais) and subsequently thereafter posted on iPhone blogs like wildfire. Hey, why not, it’s a picture of the upcoming iPhone right?! 😉 I think if it was the Canadian leaked version, there would be a huge Rogers logo plastered on the back!

Like I said above, the weeks and days leading up to new product announcements are just plain interesting. Who knows what will come up next and be “leaked” or “discovered”. One thing I do know, is it sure is fun adding fuel to the fire! 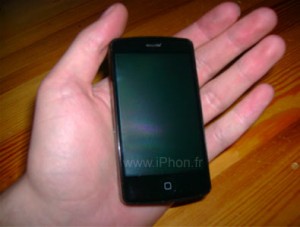 As reported by 9to5Google, Google’s new wired Nest Doorbell which appeared in the Google Home app last month has been leaked early in stores with availability expected later this week. The new Nest Doorbell was spotted in a Best Buy store, with the packaging saying “2nd generation” and “Wired” with a check mark, in white and dark...
Usman Qureshi
8 mins ago

As the volume of trips to and from post-secondary campuses across Canada is doubling, Uber is sharing some back-to-school trends highlighting how students are relying on ridesharing to get around on and off campus. "Now that classes are back in full swing, it’s a great time to remind students how to use Uber app features...
Usman Qureshi
35 mins ago