After several weeks of closed beta testing, the Wheel Of Fortune-style game ‘HQ Words’ has been made available to everyone within the HQ Trivia app on iOS and Android (via TechCrunch).

“HQ Words is the most interactive experience we’ve ever made”, says CEO Rus Yusupov, who recently took the role after the tragic death of fellow co-founder and former CEO Colin Kroll. 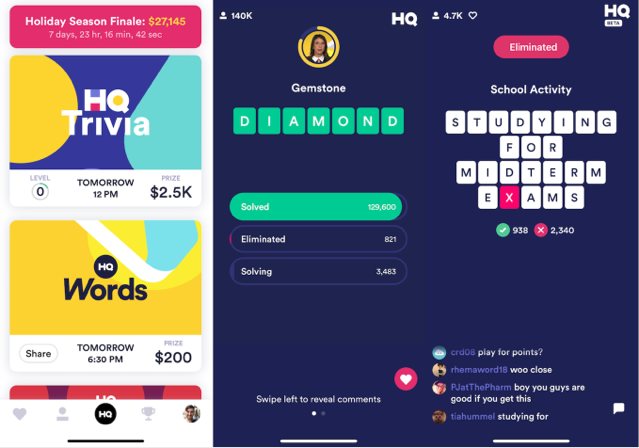 For those who are new to HQ Words, the game lets players compete live to solve word puzzles by correctly choosing what letters are hidden.

For instance, if the clue is “gemstone” and you’re shown “_ _ _ m _ _ _”, you’ll have to tap D, I, A, O, and N in any order. Choose three wrong letters or fail to fill out the words and you lose. Players also get to spin a wheel before the game starts to get one letter that’s automatically revealed each round.

HQ Words is much more frenetic than Trivia. Rather than picking a single answer, you have to rapidly tap letters through a combination of educated and uneducated guesses. Given the faster pace of interaction, even tiny glitches or moments of lag can be enough to make you lose a round.

An HQ Words beta game earlier this week failed to show some users the keyboard, causing mass elimination. The pressure to get HQ’s engineering working flawlessly has never been higher.

You can download the HQ Trivia app and try out HQ Words for free using the following App Store link.

Twitter users could soon be able to send and receive payments through the popular social media platform, according to a report from the Financial Times. Per the publication, Twitter is actively building a payments feature for its flagship social network. The company has also started applying for regulatory licences to handle and process payments in...
Nehal Malik
28 mins ago

Netflix has just confirmed that its Kids Mystery Box feature is now available on Android devices for all members worldwide. For those who aren’t familiar, the feature provides a “fun and safe space for kids to discover their next favorite series and films”. The feature basically picks a random show or movie for kids to watch....
Usman Qureshi
53 mins ago