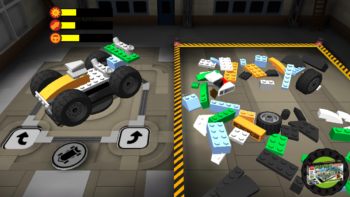 Recently I did a review of the LEGO Fusion Town Master game for your iOS devices. You can find it here. If you’re unfamiliar with LEGO Fusion, it combines real LEGO building and a virtual game. So my son and I were really excited to also try LEGO Fusion Create & Race. We both enjoy racing games and LEGO, so it seemed like a perfect combination.

Unfortunately, the game has been a bit of a disappointment. Here’s my video review of LEGO Fusion Create & Race.

LEGO Fusion game sets are still only available in the U.S. and there is still no indication when they’ll be released worldwide. Yes you can still buy them from the U.S. but you’ll also need an American iTunes account to download the app.

As the name suggests, Create & Race is focused on building vehicles and racing them around a track. There are three different racing zones and 3different types of races – Race, Battle and Stunt. In ‘Race’ you compete against virtual opponents, racing around a track several times trying to finish first while collecting studs – your virtual money – along the way. In ‘Battle’ you and your opponents have a health wheel. The object is to hit or run your competitors into objects to bring their life down to zero before yours does. In ‘Stunt’ you race around the track collecting studs while flying through the air off jumps, all while trying not to lose too many studs.

The game is quite simple. After only a couple of times playing, my 5-year-old son and I can win every race and battle without much problem – and well, stunt just isn’t that fun. We do have hopes that LEGO will increase the difficulty of the races or add more zones in future updates, but for right now it gets pretty dull because it’s so simple. 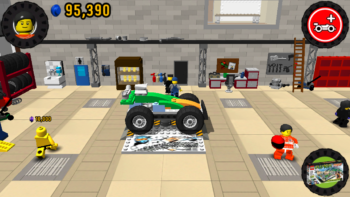 But what about the real building and scanning your vehicles into the game? For me, this is where Create & Race really fails. The set comes with 223 pieces, including the scanning plate need to scan your vehicles into the game. The only problem is, you don’t need to scan them into the game. Let me explain. To get a custom vehicle into Create & Race, you first have to build your vehicle virtually. So all the pieces that come in the game are there for you, and you use your finger to drag and place the blocks how you want them until you’re happy with your vehicle. This isn’t the easiest of tasks. It can be difficult and quite frustrating getting the blocks in place and where you want them. As you build your vehicle, its stats – speed, handling, strength – will change depending on the design.

Once you are done building your vehicle virtually, you’re supposed to build it using the real blocks. The app will provide you with step-by-step instructions. Once finished it’s time to scan the vehicle in. Unfortunately, much like Town Master, this can be difficult and very frustrating. It’s best to try scanning on a white surface. But hold on, if you’re not interested in actually building you’re vehicle out of real blocks, you don’t have to. All you have to do is build it in the app and you can skip the scan. This is very curious to me because LEGO Fusion is supposed to be about real building combined with a virtual game. The only thing you get out of actually building your vehicle with the real blocks is a real model of your vehicle. While cool, it serves no other use.

Even worse, I just found out that you can play Create & Race without even buying the set. You can do this with Town Master, but you are limited to three different buildings it has stored in game. So playing without having the set gets really boring. Not so with Create & Race. You can build and modify your vehicles and then race them all without spending any real money. Now LEGO may patch this in a future update, but as of this review you can enjoy the whole game.

I really had high hopes for LEGO Fusion Create & Race, but so far it’s been a disappointment. From being too easy, to not having any incentive to use your real LEGO bricks, Create & Race right now is a definite pass. I think there is a lot of room for upgradeability and change with Create & Race, but as of this review it’s not something I’d recommend picking up. Now of course you can go play it free if you have an American iTunes account. So go ahead and give it a try, and let me know what you think.

You can get the LEGO Fusion game sets through Amazon.com