According to a research carried out by Daveaddey regarding the kinds of apps that get featured on the iTunes App Store in different countries around the world, lifestyle apps and books appear to be the most commonly featured on the Canadian App Store’s home page. It must be noted that the research does not indicate how many times these apps are downloaded or how much money they make. 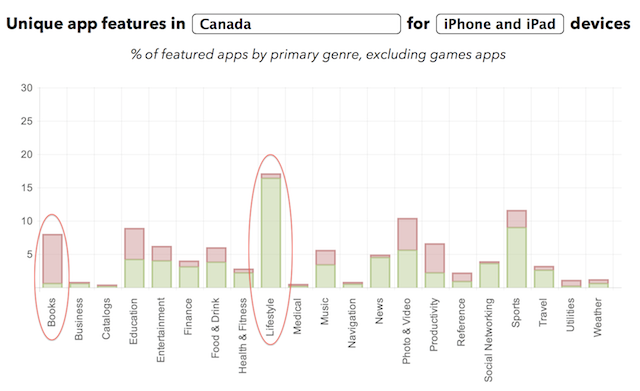 Analysing the apps that are editorially selected for feature on the Canadian App Store’s home page by the App Store editorial team, reveals that the store has a particular skew towards lifestyle apps, majority of which are free. Similarly, Books seem to feature regularly in Canada, most of which are not free (see graph above). Other commonly featured apps belong to sports, photo & video and education categories.

“Business apps fare poorly worldwide, at least relative to how many have been submitted to the Store. Brazil’s Music and Productivity features are higher than would be expected; the same can be said for the Spanish-language store. The Republic of Korea’s focus on education apps is notable as before, and there’s a slight trend towards Finance apps in West Asia. And the Photo & Video category is featured more than average in all countries, most notably in East Asia”.

The research also notes that no significant variance was noted from country to country within the games sub-genres, at least not when compared to the main genres above.