Months before the Vancouver 2010 Olympics began, people began pin trading. The Hudson Bay Company, as well as other retailers were selling Olympic themed pins that people have been trading like crazy!

With the start of the Olympics last week, pin trading has become one of largest activities in Vancouver! From The Bay, Coca-Cola, all the nations (athletes are giving/trading their country pins too!), and more, everyone is pin trading.

To join the fun, Apple has designed special limited edition pins for Vancouver! They are not Olympic themed at all, but they are very awesome and like everything at Apple, are very high quality. 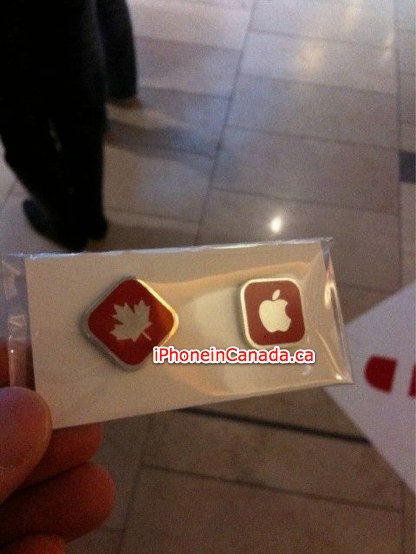 Reports also indicate that both stores seem to be giving away 500 – 1,000 pins per day, which basically translates to the first few hours after the morning store opening.

The Apple pins are a Vancouver exclusive and will definitely not be back once the Olympics are over. So if you want to grab some rare Apple swag, get going and get there early!

SaskTel has announced the expansion of its 5G network to a number of rural communities, including the Town of Lumsden. With its hyper-fast data speeds, SaskTel’s 5G network is bringing a new level of wireless connectivity to residents and businesses across Saskatchewan. “Saskatchewan people will continue to benefit from some of the best communications technologies...
Usman Qureshi
13 mins ago

Rogers and Shaw today announced an extension of their proposed $26 billion merger, along with the sale of Shaw-owned Freedom Mobile to Quebecor’s Vidéotron in a side deal that's part of the broader transaction, to February 17, 2023. "All parties remain committed to the pro-competitive transactions, which will deliver significant benefits to Canada and Canadian...
Nehal Malik
41 mins ago