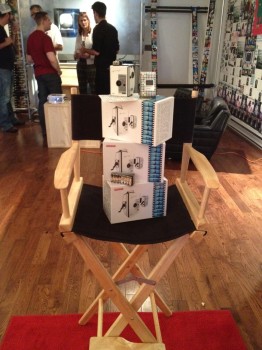 If you’ve seen people walking around taking a movie using a handcranked gadget, chances are you’ve seen a “wannabe” filmmaker taking part in the art of analogue movie making, thanks to the LomoKino. 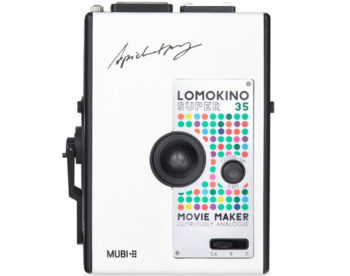 The LomoKino is an analogue movie maker that uses 35MM film, turning it into a one-minute visually-stunning home movie.

The popularity of the LomoKino is definitely growing (I’ve seen people  all over Toronto with these nifty vintage cameras).

I only call LomoKino users “wannabe” as this intriguing and burgeoning art-form continues to gain mainstream attention and credibility especially by world-rewowned filmmakers.

To commemorate “Ashes”, LomoKino recently introduced the LomoKino MUBI, a limited-edition version of the LomoKino to celebrate this amazing movie-making feat.

Each LomoKino MUBI comes with an actual original celluloid strip of “Ashes”, along with a free one month membership to MUBI – an online video gallery of LomoKino creations.

Lomography (makers of the LomoKino) held launch parties at all of their Gallery Stores worldwide (including their store in Toronto) to commemorate the launch.

If you’re wondering what LomoKino has to do with iPhone, well, Lomography also recently released the LomoKino Smartphone Holder so iPhone (and other smartphone) users can easily take part in the LomoKino craze.

The LomoKino along with the Smartphone Holder and LomoScope allows aspiring vintage-movie makers to easily (and quickly) digitize their analogue movies.  (Keep checking iPhoneinCanada, as I will share my own experience with the LomoKino soon)

The LomoKino MUBI Limited Edition is available online for $129 (standalone) or $182.02 for the LomoKino MUBI along with the LomoScope and Smartphone Holder, at their gallery store, select Urban Outfitters and other independent photo-retailers.