An iPad Lost at the Airport Goes on a Vacation

Investment banker Shelby Bonnie lost his iPad from his carry-on bag at Fort Lauderdale-Hollywood International Airport after a red-eye flight from San Francisco, only to find out after a few days that his misplaced tablet had began a strange odyssey of its own. According to The New York Times, Mr. Bonnie continued to track his iPad’s separate itinerary and entertained his followers with its whereabouts on Facebook. 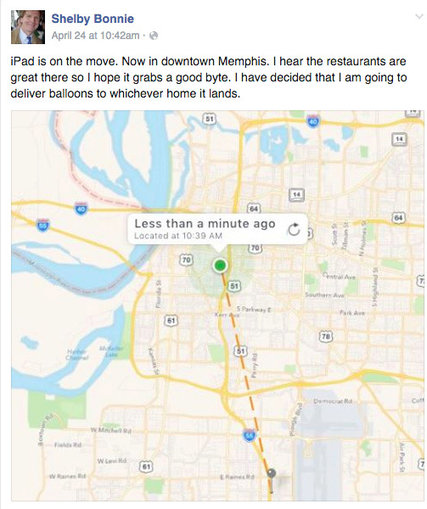 “I said, ‘I’m definitely going to lose my iPad, but I’m going to have some fun,’” Mr. Bonnie said in a phone interview. When he discovered his iPad was missing, he switched on Find My iPhone and saw that his tablet was at Elvis Presley’s Heartbreak Hotel at Graceland in Memphis. Through the app, Mr. Bonnie sent a message, visible on the lock screen of the iPad, telling whoever had the device to call his cellphone for a reward. No one did.

Over the next few days, Mr. Bonnie began providing regular updates on the iPad’s whereabouts to his friends on Facebook, providing screen shots from Find My iPhone.

Mr. Bonnie  provided screen shots from Find My iPhone that showed the device headed to downtown Memphis and at the Links at Riverside, a golf course. “IPad is on the move,” one of his updates said. Most of his posts got more than 100 likes on Facebook and dozens of comments, as Mr. Bonnie’s online acquaintances became more engaged in the story.

“Please keep your fans informed as to the results of the mystery,” one commenter said.

Eventually, Mr. Bonnie paid to have his iPad shipped to his home in San Francisco by UPS, where he hung a banner saying “Welcome Home” on his front door. To read the full journey of his iPad, hit up the source article.

Taiwan Semiconductor Manufacturing Co. (TSMC), Apple’s primary chip supplier, will also produce advanced 4-nanometer chips at its $12 billion USD under-construction manufacturing facility in the U.S. state of Arizona — reports Bloomberg. The information comes from people with knowledge of the matter, who said TSMC will announce the new plan next week during a ceremony at...
Nehal Malik
30 mins ago