Apple informed developers today they can now offer lower price tiers for the Canadian and New Zealand App Store. Known as Alternate Tier A and B, developers can now price apps at $0.99 CAD or $0.99 NZD:

Lower price tiers, Alternate Tier A and Alternate Tier B, now let you offer paid apps and In-App Purchases at $0.99 (CAD) and $0.99 (NZD). Existing apps that already use these price tiers have been automatically updated.

Less than a week ago Apple increased prices in Canada and other nations to reflect sagging local currencies. Starting prices for a $0.99 USD app in Canada jumped from $1.19 CAD to $1.39 CAD.

With these new pricing tiers, developers can still charge $0.99 CAD for apps in Canada, but they will take a knock in revenue due to the exchange rate. 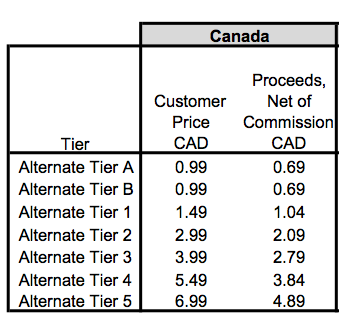 Apple announced these new tiers for Canada and New Zealand as part of their original App Store price increase announcement earlier this month, but now these alternate price options have gone live for developers to implement, if they so choose.

Fluctuating foreign exchange rates (such as the lower Canadian dollar) impacted Apple’s Q1 2016 earnings, as the company noted for every $100 in non-USD generated from sales, they only gained $85 USD.