Lyft to Match Round Up & Donate Contributions to SickKids Foundation 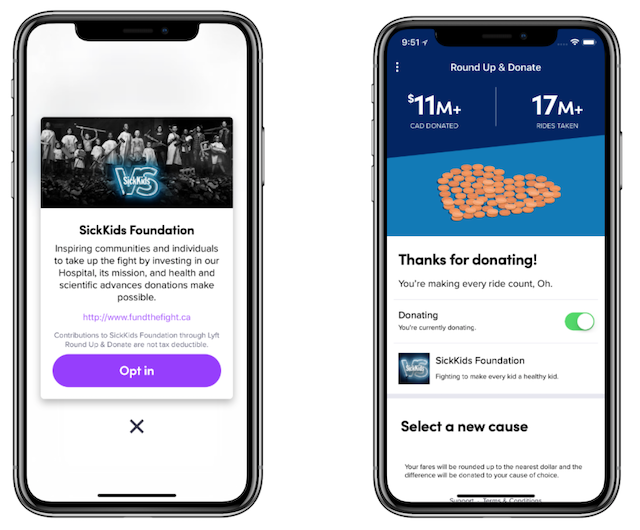 Strengthening its partnership with the SickKids Foundation, ride-sharing company Lyft has today announced it will raise additional funds for the foundation by matching every donation made by the Lyft Toronto community through its Round Up & Donate feature, throughout the month of December, up to $10,000.

“At Lyft, we’re committed to creating positive change for the communities we serve, which is why we’re so excited to double down on our partnership with SickKids by matching Round Up & Donate donations this holiday season,” said Aaron Zifkin, Managing Director, Canada at Lyft.

“We encourage our passengers to opt-in to Round Up & Donate for a good cause. The more Torontonians round up, the more Lyft will donate, bringing SickKids closer to their goal of building a new hospital.”

Lyft’s partnership with SickKids Foundation has raised over $50,000 to date. Although Round Up & Donate on average adds just a few dollars per month for passengers, the collective action makes a big difference.

“We are so grateful to be Lyft’s first charity partner in Canada and for the generosity of riders over this first year,” said Seanna Millar, an SVP at SickKids Foundation.

The announcement comes on the heels of Lyft reaching a $10 million donation milestone through more than 20 million rides rounded up across North America since May 2017.

Amazon announced an all-new Alexa experience built just for kids today, with the launch of Echo Dot Kids. Echo Dot Kids come with Owl or Dragon designs and a 2-year worry-free guarantee. If your speaker breaks, Amazon will replace it. Also included are parental controls (time limits; explicit lyric filtering) and one year of Amazon […]
Gary Ng
16 mins ago