An early teardown of the new Mac mini offers our first glimpse at Apple’s new M1 chip and redesigned logic board. 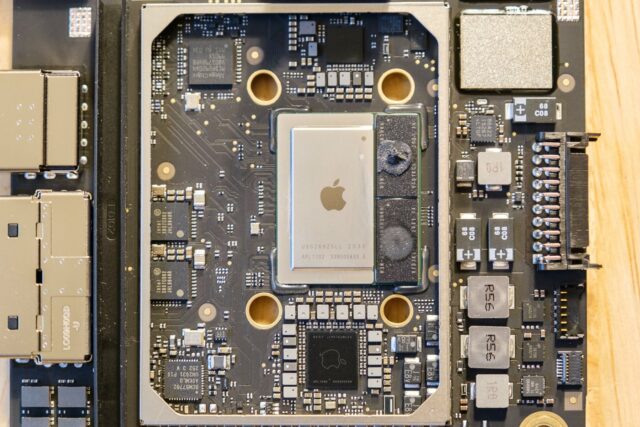 According to a post on the eGPU.io forum, the desktop’s internals are much smaller than before, despite the increase in power. The teardown video shows that the internals of the M1 Mac mini are protected by a rubber cover on the outer side and a metal plating inside it. Once you remove these two components, you will find that the new Mac mini has three major components, fan, logic board, and power supply.

There’s not a whole lot to see, thanks to the chipset’s external shield, but the M1 does feature a large Apple logo. It’s also accompanied by Apple’s new unified system memory modules, of which there are two.

The logic board on the new Mac mini is smaller due to the M1 chip, which uses an SoC design that incorporates RAM and storage modules, freeing up a lot of space. Plus, many other components including those related to connectivity have been integrated into the SoC.

Unsurprisingly, many of the Mac mini’s components are soldered into place. That means repairing anything that goes wrong is near-impossible, while do-it-yourself upgrades are a definite no-no.

With that being the case, Mac mini buyers should ensure that choose the right RAM and storage configuration at the time of purchase. There is no way to add to these things later.

Check out the entire teardown here.