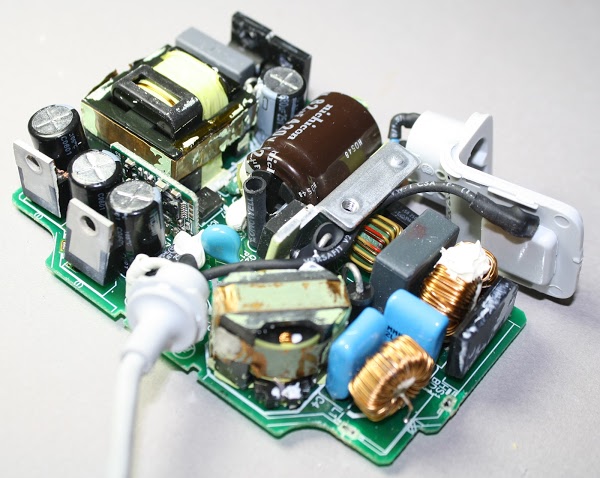 Ken Sheriff, the same guy who revealed the risks in using counterfeit chargers in an extensive teardown of a counterfeit iPad power adapter and a genuine Apple adapter, has today put up another in-depth teardown of a MacBook charger, revealing surprising complexity inside Apple’s power adapter. Looks like there’s a lot more circuitry packed into the compact power adapter than one would expect, which also includes a microprocessor.

“For the teardown I started with a Macbook 85W power supply, model A1172, which is small enough to hold in your palm. The picture below shows several features that can help distinguish the charger from counterfeits: the Apple logo in the case, the metal (not plastic) ground pin on the right, and the serial number next to the ground pin.

Strange as it seems, the best technique I’ve found for opening a charger is to pound on a wood chisel all around the seam to crack it open. With the case opened, the metal heat sinks of the charger are visible. The heat sinks help cool the high-power semiconductors inside the charger. The other side of the charger shows the circuit board, with the power output at the bottom. Some of the tiny components are visible, but most of the circuitry is covered by the metal heat sink, held in place by yellow insulating tape”. 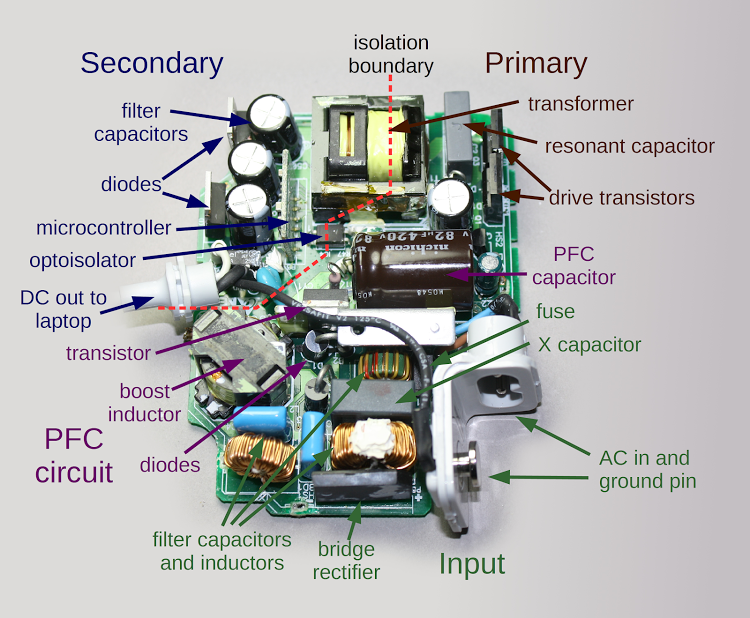 The above diagram shows the main components of the charger. AC power enters the charger and is converted to DC. The PFC circuit improves efficiency by ensuring the load on the AC line is steady. The primary chops up the high-voltage DC from the PFC circuit and feeds it into the transformer. Finally, the secondary receives low-voltage power from the transformer and outputs smooth DC to the laptop.

Check out the highly detailed teardown on Ken Shirriff’s blog.