Apple officially added external GPU support with the introduction of macOS 10.13.4, and now new benchmark tests show that while there are still a number issues to be worked out, the improvements available are substantial. 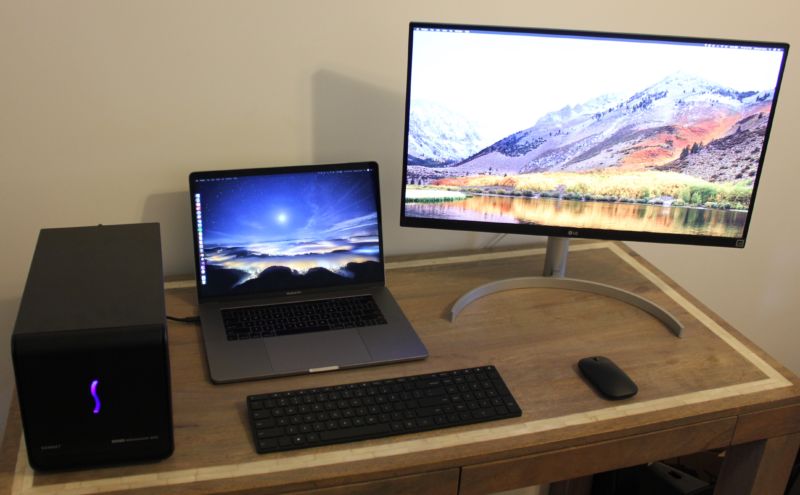 Ars Technica has run benchmark tests between the AMD Radeon RX 580 and the top-end 2016 MacBook Pro’s own Radeon Pro 460 (though it should be noted that the 2017 MacBook Pro features a Radeon Pro 560). The enclosure used was the Sonnet eGFX Breakaway Box 350W.

The RX 580’s performance, however, varied widely between applications. Ars Technica noted that while gains were impressive in the majority of supported applications, some apps did not enjoy the gains that might have otherwise been expected, often without any obvious reasons.

The site uses the Hitman game frequently in its benchmark tests, and interestingly, the game refused to run this time. With an external GPU, it’s difficult to predict whether an application will see strong performance improvements or, on the other end of the spectrum, crashes and problems.

One of the more surprising findings is the fact that Final Cut Pro X did not use the external GPU at all, instead relying on the MacBook Pro’s internal GPUs to perform demanding tasks. Ars Technica created a five-minute 4K video with a few applied effects an exported it to an H.264 video file, but the external GPU wasn’t used at all.

Overall, while external GPU support is a welcome addition, it’s clearly still in its earliest stages of functionality.

“eGPUs might be publicly supported now, but they’re still not ready for primetime,” concludes the report. “The experience is too unstable, support isn’t robust enough, there are too many caveats and limitations, and Boot Camp support will be necessary for eGPUs to be attractive to many consumers.”

Head on over to Ars Technica to check out the full benchmark tests.