When Mountain Lion was released last month, the number one issue was related to battery life on Macbook Pros. Many users on the Apple support forum reported their battery draining exceptionally faster than it had on Lion.

Since the release of OS X 10.8 there was one update, which was released yesterday as OS X 10.8.1. We knew it wouldn’t be very long before tests underwent to compare battery life, and the first report is out from MacObserver today.

The results weren’t as promising as I had hoped, but battery life on the final build of OS X 10.8.1 has slightly improved over the original adaptation of Mountain Lion. Take a glance at the comparison chart below (via MacObserver) 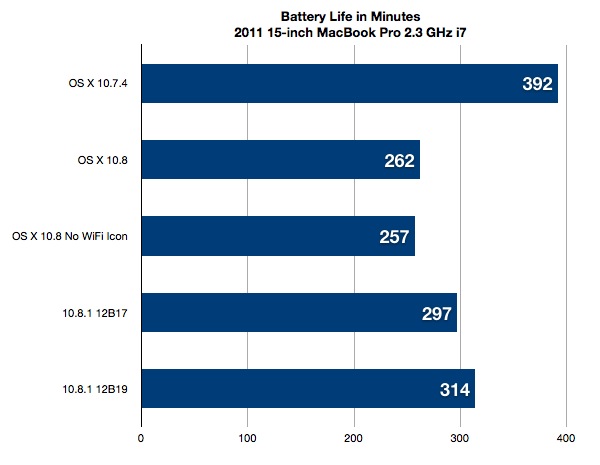 As you may see, the final build of OS X 10.8.1 serves 314 minutes of battery life compared to the 262 minutes on the original. This is still considerably less than the 392 minutes on Lion, but we at least have almost another hour of battery life to work with.

All tests were completed with same 2011 Macbook Pro and the battery is considered to be in “normal” condition. This is how the test worked:

Our battery life test was performed by using a custom Automator application under battery-saving conditions: the screen at 50 percent brightness, keyboard illumination off, and all applications and services disabled except for WiFi. To keep the Mac running throughout the test, we disabled system and display sleep in System Preferences, and deactivated the screen saver.

The release notes for OS X 10.8.1 didn’t mention any battery life improvements, although that was probably the most substantial change of the update.