A new game by the name of Danny Trejo’s Vengeance: Woz with a Coz is an upcoming iOS title that will bring Apple co-founder Steve Wozniak and ‘Machete’ film actor Danny Trejo side by side as playable video game characters (via CNET). The game is due to be released around November 22nd on Thanksgiving. 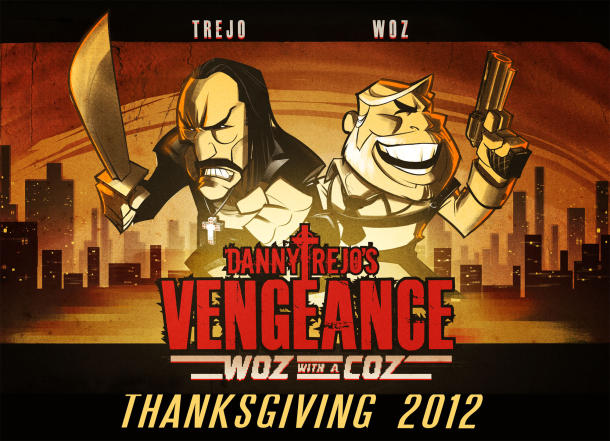 The 8-bit platformed, which is basically a promo for Trejo’s film “Vengeance” due out next year, puts the unlikely duo together with weapons in a city full of baddies. According to the source, the game is all about teaming up with Trejo to rescue Woz’s wife, Janet, who has been kidnapped.

In “Woz with a Coz” on iOS, the Apple co-founder and his wife, “J-Woz,” are enjoying their evening together, taking a glide. Unfortunately, their otherwise quiet evening is ruined — not by a competitive product release — but rather by street thugs kidnapping “J-Woz”!!! Your dynamic duo of Steve and Danny must hurry and swing into action as they tear up Fusion City in their quest to rescue “J-Woz,” and maybe cause a little mayhem on their way…

The game will be the first title on iOS to feature the company’s co-founder Steve Wozniak, who left Apple in 1987.