Apple’s Macintosh Plus, which was discontinued two and half decades ago, has just been brought to life by a couple of enthusiastic developers in the form of a Nintendo 2DS and 3DS emulation (via MacRumors). Developer TarableCode ported the Mini vMac emulator to Nintendo 2DS, while her fellow homebrew enthusiast LarBob Doomer has shown off the emulated Macintosh Plus in action on a Nintendo 3DS. 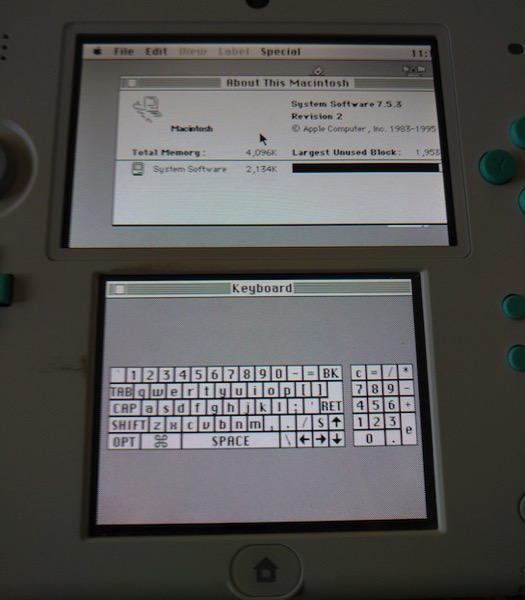 The above picture shows a Nintendo 2DS running Macintosh System 7.5.3 or called Mac OS 7, which was released in 1996. The 2DS’s directional pad functions as arrow keys, while the L and R shoulder buttons are the mouse buttons, the Y button toggles the on-screen keyboard, and both the circle pad and touchscreen move the mouse. While its practical applications are obviously limited, the homebrew emulator is certainly a unique proof of concept.

Check out the following YouTube video in which the developer shows off a functional version of System 6 on a Nintendo 3DS, opens apps, inputs text from the keyboard, and eventually shuts down the device.