The battery life of the latest-generation MacBook Pros seems to vary by user due to different usage factors, but you may be, as others are, angry about your poor battery life. So far, Apple’s software has warned users if any app is drawing too much power, but with the latest macOS beta, Apple went a step further (via MacRumors).

If you are using a MacBook Pro running macOS Sierra, you may be familiar with the information you get by clicking on the battery icon displayed in the menu bar. This feature allows users to monitor apps using significant energy: think Safari (I see it quite often, as I have many tabs open) or Spotlight and more. 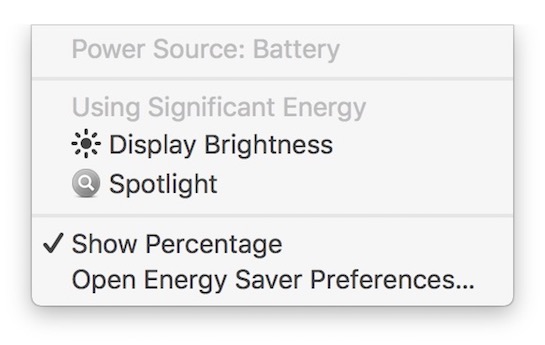 The latest beta version goes beyond that: it also includes the display brightness. When a Mac’s display is set above 75% brightness, a new item appears under the battery menu called “Display Brightness”. If you click on that, it lowers the display’s brightness to 75%.

Since the battery life of the new MacBook Pro has been quite a controversial topic – users most affected seem to those with the Touch Bar – this small feature addition could help you better monitor your Mac and improve battery life.

Canada's required use of the ArriveCAN app for travellers, along with the remainder of the country's COVID-19 border measures, are set to lapse on September 30 and Prime Minister Justin Trudeau has reportedly agreed to not renew the mandates (via The Peterborough Examiner). Two senior government sources told The Canadian Press that the cabinet order implementing...
Nehal Malik
5 mins ago

Apple has officially launched sales of its new Apple Watch Ultra and AirPods Pro 2 in Canada and beyond, now available for purchase at Apple Store locations and Apple Authorized Resellers. “Inspired by the most extreme activities, Apple Watch Ultra brings a new bold design and a wide range of features built for endurance, exploration, […]
Gary Ng
2 hours ago

In a new ad for its Astro A30 headset, Logitech briefly shows a white Xbox Series X amongst other very real pieces of hardware. As Microsoft has not made any formal announcements of a white variant to its high-end console, this brief look does raise some questions. The ad and its contents were first spotted...
Steve Vegvari
4 hours ago