Macs Outpaced the Global PC Market by 25% in Last Quarter

Analyst Charlie Wolf with Needham & Company has highlighted Apple’s massively successful holiday quarter, revealing that Macs outpaced the worldwide PC market by almost 25% last quarter, which marks the largest margin between the two in past 5 years, AppleInsider is reporting. Wolf notes that Apple’s notebook and desktop shipments grew 18.1% in the December 2013 quarter, outpacing the overall PC market by 24.7%. 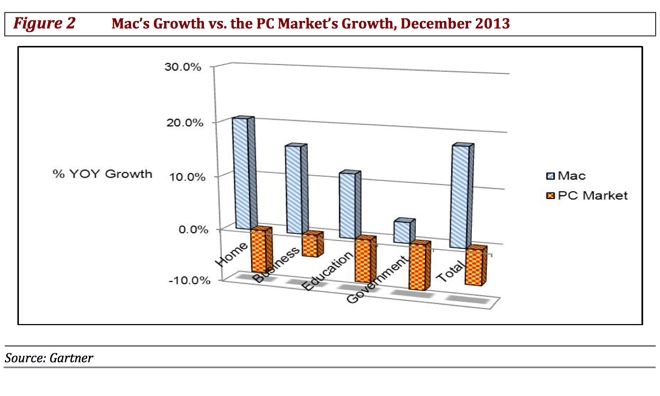 The report points out that Windows machines dominated PC shipments have been shrinking year over year for the last seven quarters. And even though Apple has also seen its Mac shipments decline in some quarters, the company has continued to gain market share versus the PCs in almost every quarter since 2005. Meanwhile, as the Mac’s unit share of the global PC market has grown from 2.1% in 2005 to 5.5% last year, Apple’s revenue share growth has surged from 3.2% to 10.4%.

“The question we don’t have an answer to is whether Mac shipment growth can overcome the headwinds of negative growth in PC shipments,” Wolf wrote. “While the Mac represents a small fraction of Apple’s revenues, it nonetheless is an important barometer of the health of Apple’s ecosystem.”

“Shoppers at the Apple Stores most likely consider both a MacBook and an iPad for their next purchase,” he said. “The allure of an iPad is undoubtedly far greater when it is in close proximity to a MacBook than it is in other shopping venues.”

Wolf believes that while tablets have undoubtedly cut into PC sales, sales of the iPad may eventually affect Mac sales more adversely than traditional Windows PCs.

Any shred of mystery Google was saving for its Pixel 7 series launch event on Thursday, October 6, likely dissipated when a detailed and legit-looking spec sheet for the two phones leaked online over the weekend (via 9to5Google). Apparently, a mobile carrier in Taiwan prematurely shared the spec sheet for Google's Pixel 7 and Pixel...
Nehal Malik
30 mins ago