Macworld Expo 2009 officially begins today in San Francisco! This is essentially where hardcore Apple fans from around the globe make their pilgrimage to pay homage to Steve Jobs and his Apple crew. However, there is one exception with that previous statement–Steve Jobs won’t be there making the keynote presentation on Tuesday, as he has for the past 10 years.

Instead of Mr. Jobs himself, we’ll be hearing from VP of Product Marketing, Phil Schiller. I can only hope that he will be dressed in jeans, a black turtle neck, sporting a pair of New Balance jeans and drinking bottled water with a sport top. Rumors have resurfaced speculating the health of Steve Jobs which is why he is not making the all important keynote speech.

This Macworld is going to be Apple’s last. Why? Well, according to reports Apple is slowly turning away from big conferences as they feel they don’t want the Expo to dictate their product development and release schedule. 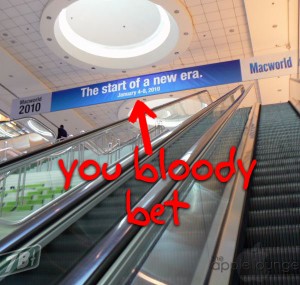 (image courtesy of the the Apple Lounge)

What Will Apple Announce at Macworld 2009?

Apple fans get excited once the New Year rolls around because that means Macworld is just around the corner! Previously, I never cared about what Apple had to do or say. Now that I’ve embraced my iPhones and my new Macbook I can’t get enough Apple news! I have risen from the ashes to become a self-declared fanboy.

Just what will Apple announce during Macworld? Here are some of the latest circulating rumors…

Your guess is as good as mine when it comes to these rumors. Personally, I think the 17″ unibody Macbook Pro sounds like a shoe in, along with a Mac Mini and iMac update as well. As for our precious iPhone 3G, if history repeats itself then we can expect larger capacities (32GB/64GB SSD?) and a plethora of rainbow colors just like the previous iPod Nano update.

Either way, on Tuesday at 9AM PST/12 PM EST, keep your eyes peeled because the entire interwebz will be re-hashing every word being spoken at Macworld. Maybe a surprise visit by Stevey J could be in store!

What do you think will be announced by Apple at Macworld? Let us know in the comments!

PS – If you haven’t seen this video of David Pogue from the NY Times singing about Apple, check it out!