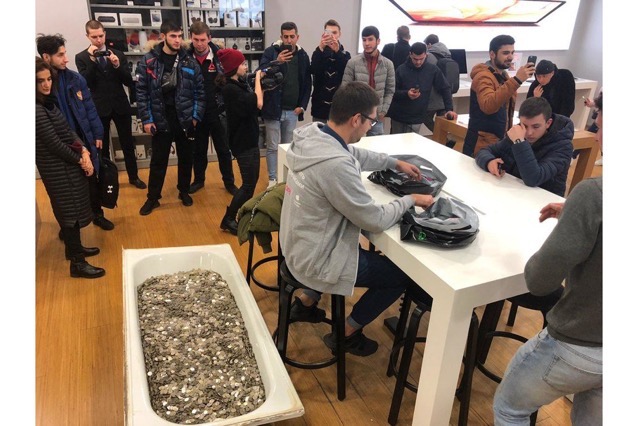 A Russian man apparently took a bathtub full of coins to an authorized Apple reseller to purchase a brand-new 256GB iPhone XS. According to PhoneArena, the above picture was posted on Facebook by Ludmila Semushina, head of PR at re:Store–an Apple authorized reseller–where it was snapped.

A group of men helped the guy carry the rather heavy tub and its contents into the store. There was reportedly over 100,000 Russian rubles in the tub, which amounts to more than $1,400 US dollars, the exact price of the iPhone XS with 256GB of storage:

“And if you wondered why there is a whole group of men waiting for the new phone, well, the reason is simple: it took that many people to carry the heavy bathtub inside the store. With all this, congratulations to the buyer and condolences to the clerk who had to count the coins.”

There appears to be a woman filming with a camera, so the stunt may be eventually published to YouTube on some Russian vlogger’s channel. Paying for a new iPhone with coins in a bathtub equates to views. And in 2018, it’s all about #doingitfortheviews.

Update November 15, 2018: Below is what appears to be the full YouTube video: