Man Sues Apple for $10 Billion, Feels Confident About His Chances

Thomas Ross, a businessman from Miramar, Florida, has filed a $10 billion lawsuit against Apple claiming that the iPhone, iPad and iPod all infringe his 1992 invention of an Electronic Reading Device, or ERD. In an interview with The Guardian, Ross said that he feels very confident about his chances of winning. “I am just one person going up against the resources and power of Apple, the biggest corporation in the world. But what’s right is right”, he said. 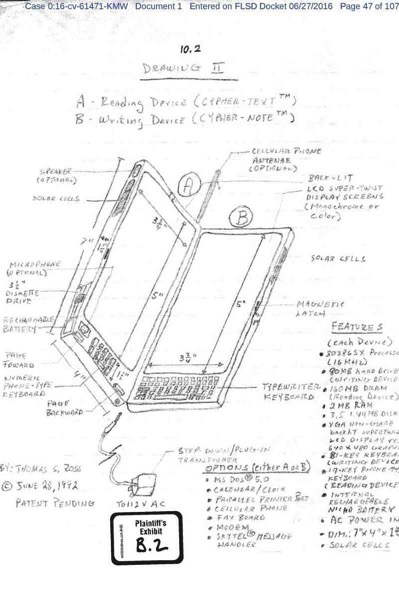 Ross’s concept, which never went further than the design stage, would allow a user to read news articles and view images and videos on a flat touchscreen surface. The conceived device featured a back-lit screen, with ability to store media on the device and on remote servers. The patent was filed four years before the Palm Pilot launched and 15 years before the first iPhone. Ross says he worked on the idea for more than a year, drawing on his experience as a software consultant.

“I would be at home wanting to read books and it dawned on me that it would be nice to have a device aggregating different functions. It was somewhat cumbersome to carry around different devices for different purposes – the trend at the time,” he said.

In addition to the three hand-scribbled images of the device, Ross also created a flowchart showing how media could be requested and downloaded from a remote server as well as a description of the device’s purpose, look and feel. Ross never took his invention further than the design stage. “It was a question of funds. I was not a rich man and neither am I today. I was never good at going after investors and selling them my idea. I am a quiet man,” he explained.

Ross believes that Apple’s iOS devices are “the very essence” of his ERD. “I am very confident. I believe in what I did. In spite of the odds I feel that I have a shot at it.” Apple has not yet issued any official comment.