Manitobans: How to Get $10 from Visa for Not Shopping at Walmart

Walmart Canada stopped accepting Visa cards at their 16 stores in Manitoba on October 24th, in what is an ongoing dispute over interchange fees. The retailer wants to pay fewer transaction fees to Visa and banning acceptance of the card is the latest protest.

Visa Canada has fired back, by launching a new ad campaign where customers in Manitoba can get a $10 grocery rebate if they spend $50—at any other store other than Walmart.

Visa spokesperson Carla Hindman, when asked if this campaign was targeting shoppers to shop elsewhere instead of Walmart, told the Winnipeg Free Press, “We hope this eases the inconvenience for Visa cardholders in Manitoba who cannot use their card everywhere they may want to.” 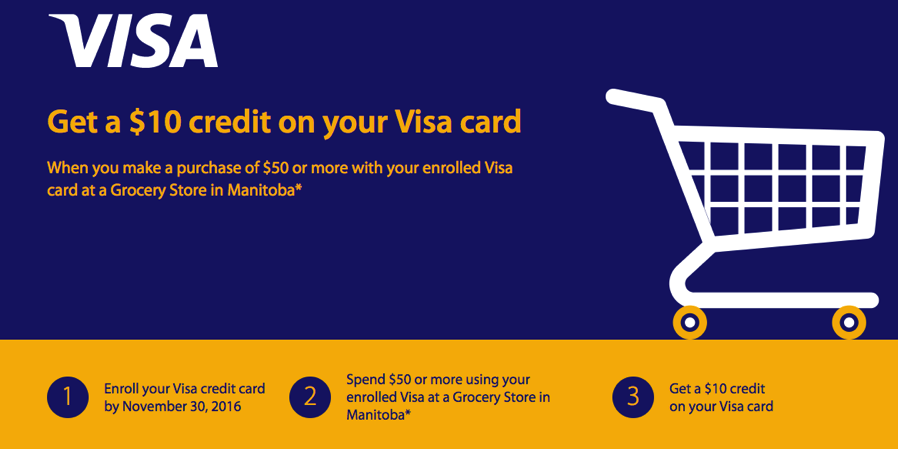 Visa had a similar ad campaign in Thunder Bay after Walmart banned its cards in its stores in the city, but that was a $25 credit for grocery purchases of $75 or more.

Alex Roberton, a spokesman for Walmart Canada, when asked about Visa’s new campaign, said “We don’t comment on how other organizations want to promote their brand.”

Visa said it offered Walmart one of the lowest rates for any merchant in Canada, but the retailer wanted an even bigger discount.

Prof. Sylvain Charlebois, from Dalhousie University in Nova Scotia, believes “For Visa to respond (like this) likely means they’ve already seen a dent in their sales.”

How to get your $10 grocery rebate from Visa if you’re in Manitoba? Just head over to this page, fill in your card number and email to register. You’ll have 15 days to make a $50 purchase including taxes to qualify.

The fine print says “Grocery Stores include physical retail locations that sell a full line of food products and are identified in the Visa Systems by Merchant Category 5411,” which excludes convenience stores.

By now, most iPhone and Apple Watch users have a Visa card added to Apple Pay so spending money will be easy. So this means all you need to do is go shopping for groceries and spend $50, and you’ll save 20% off thanks to Visa.