For iCloud, Apple has provided users with 5GB of free storage space. Your iOS device utilizes this space to automatically backup your photos, accounts, documents, settings, and apps when you are plugged in connected to Wi-Fi.

The allotted 5GB can be quickly consumed if you have multiple iOS devices backed up to one iCloud account. Want to maximize your available storage? You can do so by manually managing the apps iCloud backs up on each devices. Here’s how: 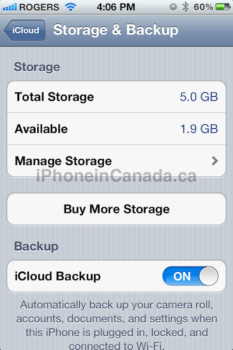 3. Toggle ON/OFF the apps you want to be included in your next backup. Some apps take up more space than others. 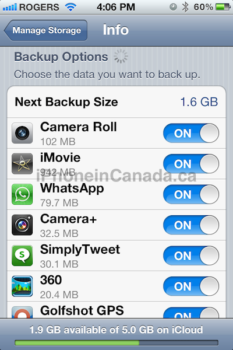 For example, I can live without having the Groupon app eating up 6.3MB of my iCloud storage. If you have hundreds of apps, these small savings will add up. Right now, my combined iPhone and iPad backups total 3GB.

Of course, if you are almost out of space, you can always buy upgrade your account from Apple, for the following prices (this storage is an addition to your existing 5GB:

Existing MobileMe users that transferred over to iCloud received 25GB total of storage. How much space do your iCloud backups take up?