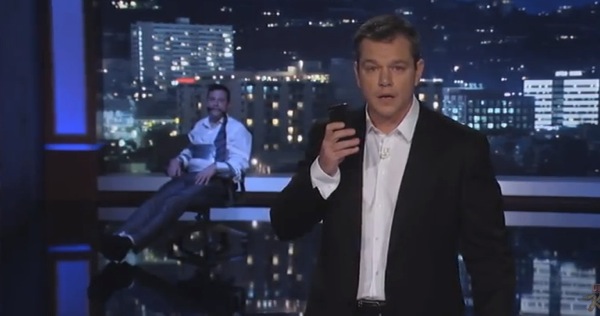 Yesterday actor Matt Damon got his sweet revenge on Jimmy Kimmel Live. After years of having Kimmel note the show was ‘out of time’ for Damon, the latter ended up taking over the show.

For background on the episode, here is the clip of Kimmel ruining Matt Damon’s life:

During the opening, Damon took out his iPhone to ask Siri for help with his opening monologue.

Damon: “Siri who’s the best stand up comedian in the world?”

Siri: “Definitely not Jimmy Kimmel. He is not funny at all. He is terrible. He is human garbage.”

I’m not going to spoil the clip. Watch it below

Hilarious! The entire episode is online but clips are out of order. Totally worth it to check out the episode if you haven’t already.