Earlier this month American Express updated their Apple Pay marketing page to clarify their cards are only “accepted at participating McDonald’s Restaurants in Canada,” a detail which Apple Canada’s page lacks.

Some McDonald’s franchisees do not support American Express, but the most part locations in major cities do.

Now, it looks like some locations in Vancouver have started pushing Apple Pay in their stores, as noted by the sign below, which reads “Now you can use your iPhone to pay”, as spotted by iPhone in Canada reader @jaymes earlier this week: 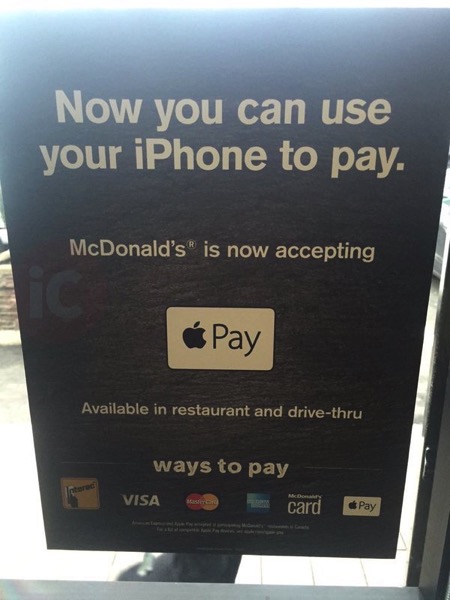 For now, this looks like locations in Vancouver are pushing Apple Pay, which could be part of a wider marketing launch by the fast food chain. We called a location in Toronto, which stated they do not have any Apple Pay marketing materials yet.

Update: Thanks to you awesome people, the marketing campaign has also been seen across Canada at various locations.