Meet August, the ‘Smart’ Door Lock that “Talks” to Your iPhone [VIDEO]

Yves Behar is about to arrive at your doorstep. Yes, the industrial designer known for “One Laptop Per Child,” Jawbone products and SodaStreams seltzer-maker is just about to get access to your home through his new invention: the August smart-lock system for your door (via AllThingsD). 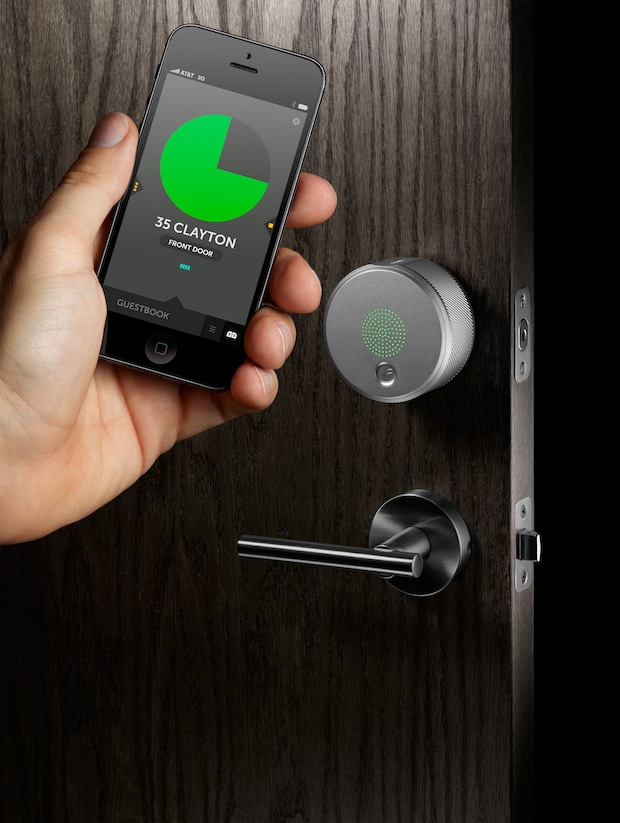 What is special about this door-locking system is it recognizes its owner and will automatically open the door for you upon approach even if your iPhone is in your pocket. The system uses low-energy Bluetooth connectivity (instead of using Wi-Fi), as well as it stands out with its great design featuring machined aluminum. The smart door lock will be available in different colours.

Yes, your August door lock system is iOS compatible. A web dashboard and mobile app lets you share digital keys and supplies important information such as logs of who has entered your home and when.

The August system has several advantage over the competition, with of them being design-related: it has a two-step installation process and it fits on the back of a door.

One drawback, though, could be the price. You have to shell out $199 for the system, and unfortunately you won’t have it until November or December. You can check out the August sales video below.

Is this something you will jump on?

Google has joined forces with consumer advocacy group OpenMedia to oppose the Liberal government's controversial Online Streaming Act, also known as Bill C-11. The Liberals tabled Bill C-11 in February as an amendment to the Broadcasting Act. It is designed to give the Canadian Radio-television Telecommunications Commission (CRTC) regulatory authority over online streaming platforms, the...
Nehal Malik
17 mins ago

Apple Music has just rolled out the ability for artists and bands to personalize their profile page with a custom bio, as well as the option to add their hometown, birth date or year formed, and more (via MacRumors). Following the latest updates, artists can now also quickly add lyrics for their songs on Apple...
Usman Qureshi
26 mins ago