In an internal announcement leaked by C450 AMG, Mercedes-Benz has confirmed that Apple’s CarPlay is coming to a number of 2016 model vehicles, as soon as 1 December 2015 or 8 January 2016 (via MacRumors). 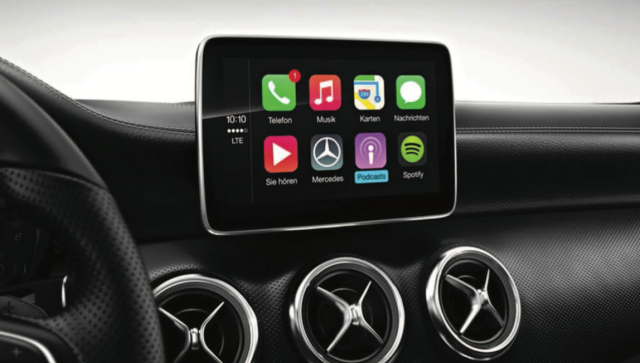 Vehicle owners will operate Apple CarPlay using the central controller or touchpad (if equipped), and activate Siri for voice commands by pressing the voice control button on the steering wheel.

Apple CarPlay® will be a completely different interface than the customary Mercedes-Benz infotainment. The customer will not be able to use the Mercedes-Benz headunit functions at the same time as CarPlay®. For example, use of the Spotify app cannot be done simultaneously with COMAND Navigation.

It looks as though CarPlay will be available on select E, GLE, and CLS models; CLA, GLA, and B-Class vehicles produced 1 December 2015 or later can be equipped with a standalone package for $350.

Below is the list of Mercedes-Benz vehicles with CarPlay:

For those who may be unaware, CarPlay allows access for users to Phone, Messages, Maps, and music streaming such as Beats 1, Pandora, Spotify, and podcast, or audio book streaming.