Update: It looks like the Metrotown link is now actually live on Apple’s website, plus they’ve sent out emails notifying customers of the grand opening. Glad we got to see it first 🙂

This week marks the opening of various international online and brick and mortar Apple Stores, including Metro Vancouver’s fourth location opening up in Burnaby at Metropolis at Metrotown. We first confirmed the existence of the Metrotown location back in late April, and grand opening date thanks to the Metropolis mall’s twitter account, but now we have the ‘official’ goods as seen from Apple.com.

All of Apple’s Metro Vancouver locations have been strategically placed near mass transit stations. The Pacific Centre Apple Store and Metrotown locations are serviced by the Expo and Millenium SkyTrain lines, whereas Oakridge and Richmond locations have the Canada Line.

Note the relatively close proximity of stores in the map below. Can you think of any other cities have that have a higher concentration of Apple Stores by distance, aside from NYC? 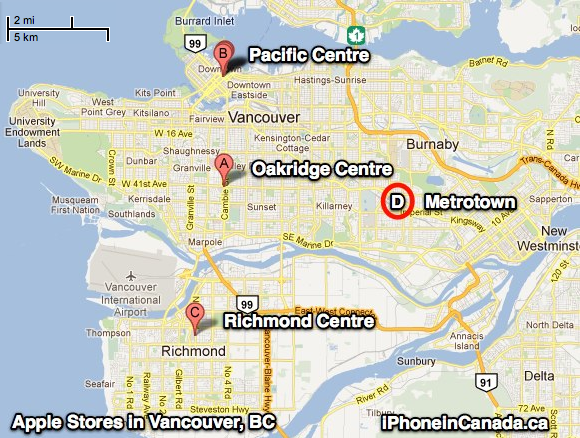 Apple’s website has been updated to reflect the grand opening, scheduled to take place this Saturday, September 24th at 10:00AM–however, it’s not ‘official‘ yet, as you have to manually type in ‘metrotown‘ in the URL (you’re welcome).

As always, the first 1000 visitors will receive a free commemorative t-shirt. Who’s lining up?