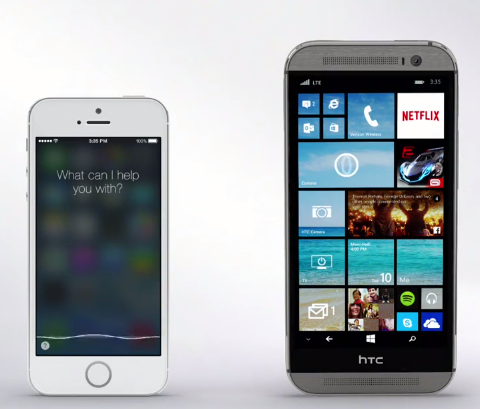 Microsoft has released a new Windows Phone ad released late this evening which compares their virtual assistant Cortana against Apple’s Siri. The latter is made out to be just another pretty face, while Cortana is the one with both brains and beauty, as portrayed via the HTC One M8 running Windows Phone:

The new HTC One® (M8) for Windows® is more than just another pretty face. Sure, it has a sleek, brushed aluminum body and stunning 5“ 1080p HD display. But now that it comes with Cortana, it’s got even more brains and beauty.

Check out the ad below—we won’t spoil the hilarious ending:

Microsoft’s Cortana came to light earlier this March, and is seen as being more powerful as Siri. This isn’t the first time Windows Phone has taken jabs at Apple’s voice assistant, as back in July a similar ad portrayed what Siri could not do compared to Cortana.

Last year, a Windows Phone ad also took time to mock Apple’s iPad as well, so Microsoft is no stranger to attacking its more successful competitor.

Let’s hope Siri gets an update when Apple announces its iPhone 6 models on September 9.