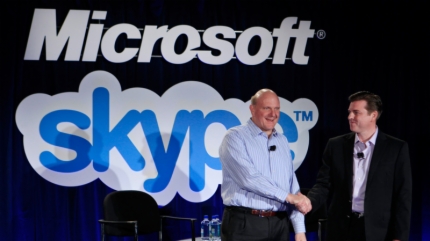 Late last night news broke that Microsoft had purchased Skype for a reported $7 billion dollars. That number has been confirmed to be $8.5 billion dollars, and today at a press conference, Microsoft CEO Steve Ballmer explained the reason behind Skype’s acquisition.

“We will move beyond email and text to rich experiences. Talking to colleagues across the world will be as seamless as talking to them across the table.”

“This allows us to extend from hundreds of millions to billions of people…We think this is a set of services that can reach everyone on the planet.â€

Skype has 170 million users, and has been growing at 40% year over year. The important note is that 40% of traffic is video. Buying Skype’s existing technology and user base will help Microsoft rival Apple’s FaceTime. Microsoft sees Skype playing a huge key with XBOX, as it will be “like a home video conferencing system, but one that costs just a few hundred bucks.”

What about iOS users?

Skype will continue to operate as usual, but now as a division of Microsoft. What about support for iOS users? Ballmer made clear “non-Microsoft devices” will keep getting support. So it looks like things won’t change.

Why did Microsoft buy Skype? Ballmer’s rationale was it would be cheaper to nab Skype up now, instead of paying more when Skype going public with its IPO.

$8.5 billion was just spent out of Microsoft’s $45 billion in cash. I sure hope this investment pays off.

Twitter's account verification subscription will cost $7 USD per month on the web but $11 per month on iPhone when it eventually relaunches, according to a report from The Information (via MacRumors). Elon Musk, who completed his long-embattled acquisition of Twitter back in October, reworked Twitter Blue to include account verification and a coveted blue...
Nehal Malik
16 mins ago