In a keynote conversation held at SMX Advanced conference in Seattle yesterday, Microsoft said the company wants Cortana, its new virtual personal assistant, to be “pervasive” not just at the country/geographic level, but also at a tech level across different devices and maybe different platforms, including iOS and Android (via Search Engine Land). 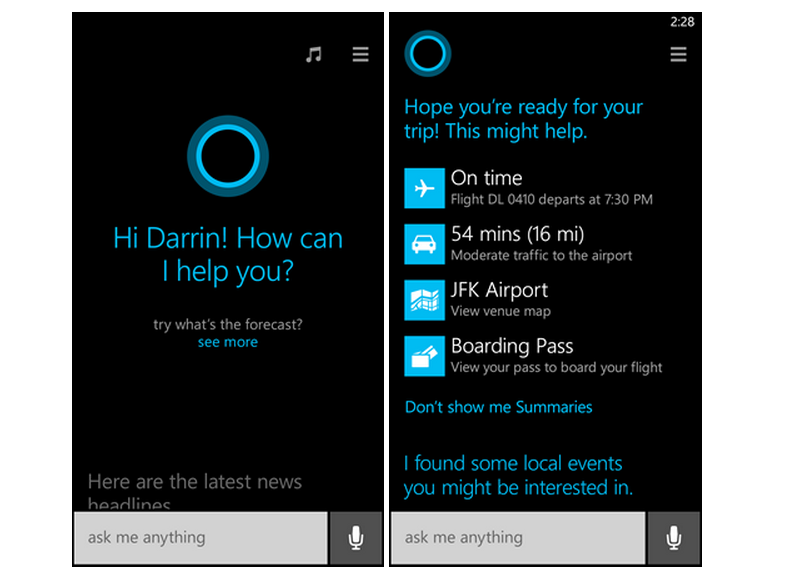 Cortana is currently available as part of the Windows Phone 8.1 developers’ preview, and it can be used by anyone in the world so long as the phone is put on US settings. Marcus Ash, a Windows Phone Group Program Manager, and Rob Chambers, a Group Program Manager in the Applications and Services Group, said during the event that Cortana could be brought to the desktop, into vehicles and other platforms too. They also spoke about the possibility of integrating ads into Cortana’s interface.

“We think we’re in the stage right now where we have to build trust with the users. We’ll explore monetization eventually, but Cortana is so nascent. It’s too early. We know there are commercial opportunities, but in this first year we need to establish what Cortana is and how people use it.

We want to scale Cortana internationally and across devices. The Android/iOS question is interesting. We’re asking, would Cortana be as effective if she didn’t have access to the details on your phone? We’re still trying to get Cortana adopted on Windows Phone and figure out what it wants to become there. But we’re actively talking about this.”

Microsoft is planning to launch Cortana alongside Windows Phone 8.1 in the U.S. within a few weeks, and then in the U.K. and China in the second half of 2014, with other countries to follow afterwards in 2015.

Apple has lifted its embargo on the first reviews and unboxing videos of its new 6.7-inch iPhone 14 Plus, which goes on sale this Friday, October 7, 2022. Normally, Apple embargo reviews have been published in the early morning, but with Google’s Pixel 7 event set to start Thursday morning at 7am PT/10am ET, the […]
Gary Ng
24 mins ago