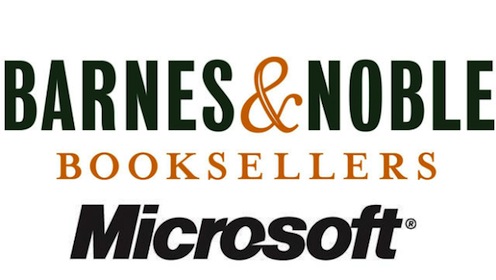 The big story of the day is Microsoft’s $300 million investment into Barnes & Noble, a company they had previously sued over claims the latter’s Nook e-reader that ran on a version of Android OS infringed on its patents. The partnership has settled the patent litigation, and a new subsidiary has been formed:

The new subsidiary, referred to in this release as Newco, will bring together the digital and College businesses of Barnes & Noble. Microsoft will make a $300 million investment in Newco at a post-money valuation of $1.7 billion in exchange for an approximately 17.6% equity stake. Barnes & Noble will own approximately 82.4% of the new subsidiary, which will have an ongoing relationship with the company’s retail stores. Barnes & Noble has not yet decided on the name of Newco.

Microsoft will soon have a Nook application for Windows 8 users and also Barnes & Noble’s college division on top of their regular book library to compete with Apple and Amazon.

It was just this January Apple held an Education Media Event in New York City, announcing they were ‘reinventing textbooks’ with the launch of iBooks 2 and iBooks Author. The combination allows anyone to create and publish books into the iBookstore.

Last May, Microsoft acquired Skype for $8.5 billion, just after they previously partnered up with Nokia to ‘disrupt mobile ecosystems’ a month prior. This latest acquisition by Microsoft allows them to jump into the book market with an established book company like Barnes & Noble–let’s see if there will be an effect on Apple and Amazon.